2020 will be the Year of the Grasshopper for East Africa 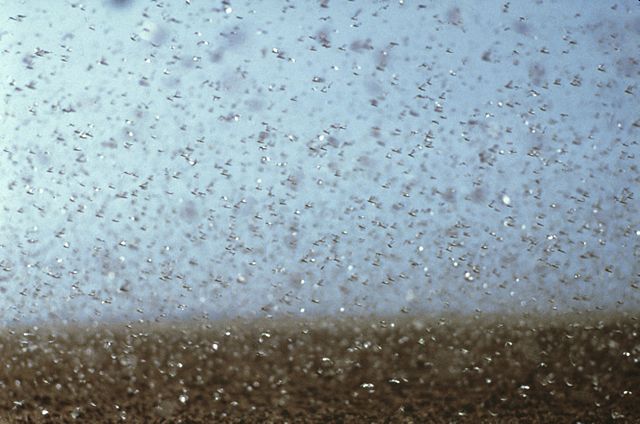 In the summer of 2019, as warm of locust migrated from Yemen across the Red Sea and Gulf of Eden into Ethiopia and Somalia. This in itself isn’t particularly uncommon as the areas around the Red Sea are an important winter breeding ground for desert locusts, which have caused problems in the East African region before.

This year is different, though.

Extreme weather patterns have created and sustained the perfect breeding environment, facilitating rapid swarm growth that the UN warns could expand a further 500 times by June this year.

As things stand, an estimated 80 million locusts are decimating crops in parts of Ethiopia, Kenya, Uganda, Djibouti, Somalia and they have moved into South Sudan in recent days. Already, an extra 13 million people are facing food insecurity as a result of the outbreak and farmers are having to watch their entire crops vanish before them.

The United Nations says it needs almost $76 million to finance aerial spraying of pesticides in the region and warns this figure could multiply by 15 if emergency action isn’t taken now. Somalia has already declared a national emergency and spraying pesticides in the country is too dangerous due to its ongoing insecurity struggles with militant group al-Shabaab.

The link between locusts and climate change

While it’s difficult to conclusively say that the current locusts crisis is a direct result of climate, the two phenomena are inherently linked. Desert locusts need a specific kind of environment in order to breed, which means the size of swarms are limited by their surrounding weather conditions.

Sooner or later, conditions become too dry for the grasshoppers to breed. The insects begin to die at a faster rate than they can breed and swarms ultimately die out. Over the past five years, though, these restrictive breeding conditions have become less frequent with tropical storms bringing rainfall and creating desert lakes, perfect for the initial wave of breeding.

As the UN Environment Programme explains:

“Wet weather also favours multiplication of locusts. Widespread, above-average rain that pounded the Horn of Africa from October to December 2019 were up to 400 per cent above normal rainfall amount. These abnormal rains were caused by the Indian Ocean dipole, a phenomenon accentuated by climate change.”

Rising temperatures also create better breeding conditions and the perfect environment for larvae to survive. These conditions allow locusts to breed freely and swarms to expand, starting a chain reaction that has been helped further by warmer temperatures and heavy rainfall in parts of East Africa.

“During quiet periods—known as recessions—desert locusts are usually restricted to the semi-arid and arid deserts of Africa, the Near East and South-West Asia that receive less than 200 mm of rain annually. In normal conditions, locust numbers decrease either by natural mortality or through migration.” – United Nations Environment Programme

Recent weather patterns in the areas around the Red Sea – including the Horn of Africa – have allowed locusts to continue breeding at a faster rate than their dying out and reducing the distance they need to travel in order to find new food sources and breed further. Now, desert locusts are known to be breeding in Djibouti, Eritrea and Sudan and devouring crops in Ethiopia, Kenya and Somalia.

Swarms have also arrived in Tanzania and Uganda with South Sudan being the latest country in the region to reluctantly welcome the destructive breed of grasshopper.

“We know that cyclones are the originators of swarms — and in the past 10 years there’s been an increase in the frequency of cyclones in the Indian Ocean” – Keith Cressman, senior locust forecasting officer at the UN FAO said earlier this month.

Once again, Africa finds itself at the forefront of climate change symptoms and the crisis is expected to get significantly worse as the year progresses.

How bad will the crisis get?

With the UN forecasting that the locust population in East Africa could multiply by 500 times come June, it doesn’t take a great deal of imagination to grasp the scale of this crisis. In the case of Djibouti, Eritrea and Sudan, these countries are already prone to drought conditions and food security, making them particularly vulnerable to the growing crisis.

The same can be said of Somalia, which faces even more difficult conditions than its neighbours. The Horn of African nation is one of the world’s most affected countries in terms of drought conditions but recent years have brought spells of heavy rainfall that overwhelm farmland and destroy homes.

To make matters worse, Somalia’s security struggles with Islamist extremist group al-Shabaab means that aerial pesticide spraying – the most effective method of dealing with locusts outbreaks – is too dangerous to carry out.

Kenya as a nation doesn’t create as many headlines related to drought conditions and food insecurity as its neighbours but there are significant parts of the country that remain vulnerable to extreme weather, including drought and food shortages. The country is now facing its worst locusts infestation in 70 years, which highlights how far the swarms have penetrated into the region.

The danger of swarms spreading into other parts of the continent is becoming a growing concern.

The United Nations is calling upon the international community to donate millions in order to tackle the crisis but the prospect of widespread food shortages in half a dozen African nations at the same time is staggering. In 2017, the United Nations said food shortages in Yemen, South Sudan, Somalia and Nigeria represented the worst humanitarian crisis since World War II during a time when donor fatigue appeared to be at its highest.

Something that is becoming increasingly apparent is that the world is only capable (or willing) to deal with so many crises at one time, which is particularly problematic as the world’s list of crises appears to be growing every year.