A review of John Magufuli’s Tanzania in 2019 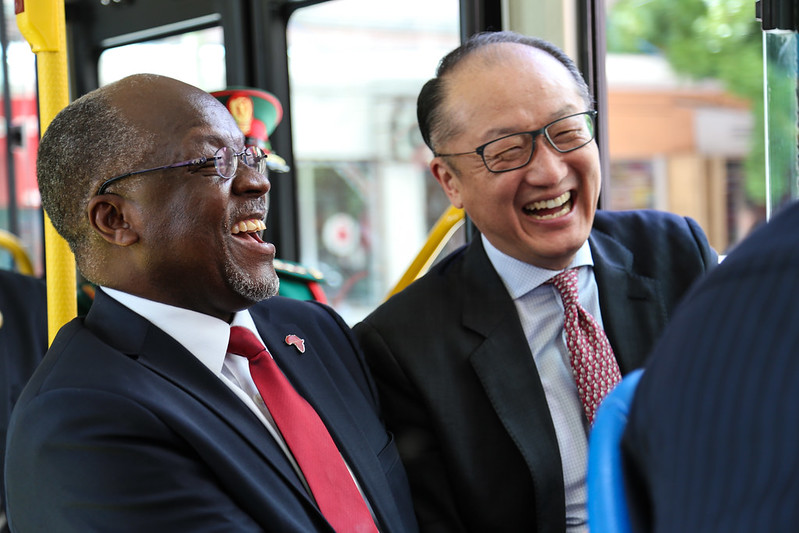 Throughout 2019, Tanzania President John Magufuli has been accused of repressing political freedom and human rights in the country. This continues a worrying trend in Tanzania, following a string of measures in 2018 affecting the rights of political opposition, journalists, children, women and members of the LGBT community.

Since the election of President John Magufuli in December 2015, Tanzania has witnessed a marked decline in respect for free expression, association and assembly. Rhetorical Attacks on rights by authorities are increasingly accompanied by implementation of repressive laws and the harassment and arrest of journalists, opposition members and critics. Self-censorship and fear of reprisals have stifled criticism. Women and girls, particularly young mothers seeking to study, continue to face discriminatory policies.

For Magufuli’s critics, 2019 has brought more of the same while his supporters point to his successes in tackling corruption. To remind us of what has taken place under his rule over the past twelve months, here’s a review of John Magufuli’s Tanzania in 2019.

January marked a busy start to the year for John Magufuli’s government with the president calling upon the central bank to start buying the country’s gold, in a bid to curb smuggling and build a national gold reserve to stabilise the currency. It was a typical example of Magufuli’s bold approach to economic matters and dealing with financial crimes.

Perhaps even more Magufulian was the president’s admission on 9 January that he monitors the phone conversations of his ministers. After moving Dr Zainab Chaula to the Ministry of Health as permanent secretary from the Local Government ministry, he admitted that he had noticed a “strain” in her working relationships with health minister Ummy Mwalimu while monitoring their messages.

“I decided to place them under the same ministry,” the president said at the time.

Sadly, it wasn’t long until the policies of Magufuli’s government took a more sinister turn. By the end of January, parliament passed amendments to legislation that give sweeping powers to a government-appointed registrar over the registration of political parties.

The amendments give a government-appointed official the power to reject the formation of new political parties – a move that opposition lawmakers said creates a de facto one-party state.

In early April, Tanzania’s government was accused of refusing to authorise the publication of the International Monetary Fund’s report on the state of the country’s economy. A leaked version of the report suggested the IMF saw GDP growth slowing to 4 percent in 2019 from 6.6 percent in 2018.

On Friday 26 April, Tanzania celebrated its 55th Union Day, which commemorates the union of Zanzibar and Tanganyika on 26 April 1964. To mark the occasion, President Magufuli pardoned 3,530 prisoners, 722 of whom were released immediately while the rest were released after completing their terms.

In early May, young activist and government critic, Mdude Nyagali, was kidnapped by masked gunmen. Nyagali is a fierce critic of John Magufuli and his colleagues insisted his disappearance was politically motivated. The activist was found days later, dumped in a bush, showing signs of having been tortured. The opposition Chadema party accused police of kidnapping and torturing the young activist but Tanzanian authorities denied any involvement.

Rights groups picked up on the story, using it to condemn John Magufuil once again as a politically repressive leader.

On a more positive, towards the end of May, Tanzania implemented a ban on plastic bags, promising to impose heavy fines on anyone found guilty of breaking new laws against single-use plastic bags. The ban would prove to be one of Africa’s most ambitious schemes to tackle single-use plastics and become one of the world’s most successful.

The move was widely criticised by members of the film industry who said it would make Tanzania a less desirable location.

In July, Magufuli added to his collection of baffling public comments when he urged women in Tanzania to “set your ovaries free,” in an attempt to inspire population growth and spur economic growth. Unsurprisingly, rights groups condemned the president’s choice of words, arguing they will worsen inequality and poverty in the country.

Towards the end of the month, alarm bells were ringing once again over Magufili’s crackdown on political and media freedoms. Prominent journalist Erick Kabendera was arrested over questions regarding his citizenship. Rights groups and international media organisations condemned Kabendera’s arrest, insisting the move was politically motivated and the latest in a long line of attacks against independent journalists, including the detention of Muthoki Mumo in 2018.

Further questions were raised over Tanzania’s economy with the World Bank contradicting Tanzania’s growth claims. With the government maintaining its projected GDP growth of 7.1 percent, the World Bank refuted those figures with its own 5.4 percent projection. In a leaked version of the report, the World Bank pointed towards Magufuli’s unpredictable and interventionist policies as a direct contributor to slower economic growth.

In August, detained journalist Erick Kabendera was charged with tax evasion, money laundering and assisting a criminal racket. After initially being detained on the grounds of questions regarding his citizenship, Kabendera was charged with a string of financial offences for which he can’t be granted bail. The charges allow authorities to effectively detain Kabendera indefinitely with financial crimes cases in Tanzania being notorious for tying defendants up in legal proceedings that can last for years.

Rights groups accused the government of fabricating charges against the journalist to manipulate its repressive legal system.

In late August, Tanzania announced a deal struck with Burundi’s government to send back 200,000 Burundian refugees to their home country. The announcement prompted concerns from rights groups that refugees would be pressured to return to the country they fled to escape deadly violence – concerns that would be realised, according to recent reports from Human Rights Watch.

In September, the World Health Organization (WHO) accused Tanzania of failing to provide information about Ebola infections in the country. The neighbouring Democratic Republic of Congo (DRC) is battling the second-largest Ebola outbreak in history but WHO said Tanzania falsely claimed to have no suspected cases, despite three separate cases being confirmed through other sources.

By October, the accusations from rights groups were intensifying once again. Amnesty International and Human Rights Watch (HRW) both published reports in the final days of October citing a “climate of fear, censorship as repression mounts”.

The rights groups interviewed journalists, bloggers, lawyers, NGO representatives and members of opposition parties to report on the deterioration of rights under Magufuli’s regime.

“Both reports found that President John Magufuli’s government has adopted or enforced a raft of repressive laws that stifle independent journalism and severely restrict the activities of non-governmental organizations and the political opposition,” HRW said in its account.

While Magufuli’s attacks on media and political freedoms are becoming so common they risk losing their shock factor, the start of an anti-gay crackdown in Dar es Salaam ensured Tanzania’s right degradation remained firmly in the spotlight until the end of the year.

Paul Makonda, governor of the economic capital Dar es Salaam and a close ally of President Magufuli, announced the creation of a surveillance squad dedicated to hunting down gay people. The team was tasked with scouring social media to find content that might reveal the sexual orientation of users in a country where homosexual acts are illegal. Makonda told reporters that round-ups would begin during the first week of November.

Within days, hundreds of people were reported to be in hiding as a result of the crackdown.

Winter 2019 brings more of the same

Local elections were held on 24 November and Magufuli’s long-ruling CCM party ran almost entirely unopposed in the polls after the vast majority of opposition candidates boycotted the vote. They cited violence and intimidation during the build-up to the election, which rights groups said had become the norm under Magufuli’s rule.

The CCM party went on to win 99 percent of the seats, prompting many to suggest Tanzania is now fully-transformed into a single-party state. The outcome of the election sparked criticism from various members of the international community with the US and the UK labelling the poll as “irregular” and “lacking credibility”.

To make matters worse, local media groups in Tanzania were punished for picking up the story of international criticism, which provoked yet another attack on press freedoms. On 27 November, a government spokesman warned local media organisations that the government would take actions against them quoting foreigners.

President Magufuli kicked off the final month of the year by pardoning another group of prisoners, this time marketing the 58th anniversary of the independence of Tanganyika. He ordered the gradual release of 5,533 prisoners, most of whom he said were serving sentences for minor offences, such as stealing chickens or using abusive language.

On 16 December, the president once again vowed to step down after the end of his second term in 2025. This isn’t the first time Magufuil has promised he will step down instead of seeking a third term in power but these promises come before he has even stood to be re-elected for a second term in charge.

The sense of inevitability that he will secure a second term with little resistance provides a glimpse of what’s to come for Tanzania in the near future.

For imprisoned journalist, Erick Kabendera, the immediate looks even more bleak. As rights groups publicly suggested at the time, the financial charges placed against Kabendera have been used to keep him in detention without trial. In mid-December, his case was postponed for the tenth time, ensuring he will remain in prison over the Christmas period, until 2 January at the earliest when his next hearing is scheduled.

For those in Tanzania campaigning for improved rights, the New Year brings little reason to celebrate. With the suppressive nature of Magufuli’s regime intensifying on a monthly basis, the rights situation by this time next year doesn’t bear thinking about.