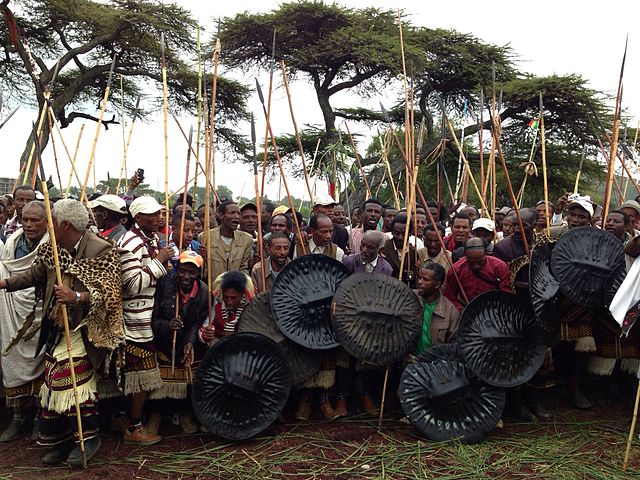 Dozens of people were killed in southern Ethiopia last month during clashes between activists from the country’s Sidama ethnic group and security forces. Ethiopia’s fifth-largest ethnic group is demanding its own federal state and the constitution legally binds the government to hold a referendum within a year of any community making a formal request for statehood.

The Sidama community made such a request in July 2018, shortly after Prime Minister Abiy Ahmed came into power. The year deadline passed on July 18 with Sidama activists threatening to form their own state if the government failed to hold a referendum ahead of the deadline.

Ethiopia’s national election board promised to hold a referendum on creating a 10th state within five months but this wasn’t enough to please all of the Sidama community. Protests began on July 18 and more than 50 people were killed in clashes between activists and security forces.

Last week, government forces took over security of the Southern Nations, Nationalities and People’s Regional State (SNNPRS), where most of the Sidama community resides, in a bid to calm unrest.

Either, the government has little choice but to give the Sidama people their vote and any more deaths sustained ahead of the vote will compromise Abiy Ahmed’s mostly positive reputation since coming into power last April.

However, the bigger problem for the country’s new PM is that a referendum on creating a 10th state will do little to solve Ethiopia’s complex ethnic troubles.

Ethiopia consists of more than 80 different recognised ethnic groups and this has been an ongoing source of tension and conflict through most of the country’s history. Ethiopia was never colonised by a European power although it was occupied by Italy between 1936 and 1941 until Benito Mussolini’s Italy was defeated by Allied forces.

Ethiopia has a long history of fighting off external forces and few things unite a nation as strongly as the threat of foreign invasion.

However, times of peace have been problematic for the ethnically diverse nation, too. Clashes between ethnic groups over territory, political power and natural resources have never really stopped and just about every community in the country will be able to recount a long history of wrongdoings by rival ethnic groups.

Considering the brutality that takes place in some of these clashes, it’s easy to understand how anger, fear and sadness turn into a form of hatred that’s difficult to forget.

Each ethnic regional state formed its own local government and key rights to land, government jobs and representation in both local and federal bodies were based on individuals’ ethnic identity rather than Ethiopian nationality.

Ethnic federalism was accompanied by a multi-party system, freedom of religion and a range of sweeping reforms under the leadership of Prime Minister Meles Zenawi. Often cited as the most influential figure in Ethiopia’s recent history, his legacy is torn between one of a visionary and another of a dictator who rendered all forms of political competition impotent.

His move to draw physical ethnic lines across the country was controversial from day one.

Ethiopia has more than 80 recognised ethnic groups and dividing the country into nine states was never going to bring the equality it promised. Instead, it created a top tier of ethnic groups and marginalised minorities even further. Ethnic groups weren’t confined to single areas of the country, either; they were scattered across the nation, which left millions of nonnative ethnic minorities living in areas assigned to other ethnic groups.

For many, ethnic federalism made them foreigners in their own country.

It also created a fight for supremacy among the country’s largest three ethnic groups: the Oromo, Amhara and Tigray. This struggle has largely defined Ethiopian politics over the past three decades – from the Tigray dominance of previous regimes to their collapse amid national unrest and the rise of current prime minister, Abiy Ahmed.

Ethiopia’s new premier has also implemented sweeping reforms but these are changes that have loosened the government’s grip on social, political and economic factors. Political opposition is no longer suppressed, press freedom is now enjoyed and the economy has been opened up to foreign investment.

Likewise, rebel groups comprising of ethnic minorities that were outlawed under previous regimes have been welcomed back into the country and the political table.

Abiy’s reforms have been widely praised both within and outside of Ethiopia but the implications of ethnic federalism are starting to bubble over amidst unprecedented political freedoms in a country that has been among the most repressive for decades.

At the most extreme end, there are ethnic and political groups striving for violent change. The early weeks of Abiy Ahmed’s rule were tainted by an assassination attempt against him. In the following months, a brutal spate ethnic violence in the capital threatened to spark all-out conflict. Similar ethnic clashes have broken out across various parts of the country as new political freedoms are taken to the limits by the loudest voices and most extreme ideas.

Then we have the legitimate political demands from the Sidama ethnic group, calling for a new federal state to be created for them. This fully complies with Ethiopia’s constitution and it’s the government that has failed to fulfil its requirements on holding a referendum on the issue.

The Sidama ethnic group is entitled to have their vote but even a result in their favour with do little to solve the wider ethnic troubles Ethiopia needs to deal with. A tenth state will be considered a victory for one ethnic group but adding more borders to an already-divided country will only marginalise its people further.

Ethnic federalism painted over the cracks of a complex ethnopolitical anatomy but it hasn’t solved any of the problems resulting from it. The very demand for another state to be created proves this and the fact that creating a tenth state appears to be the only way forward shows how much ethnic federalism has crippled Ethiopia’s political development.