Why are African immigrants in Israel painting their faces white? 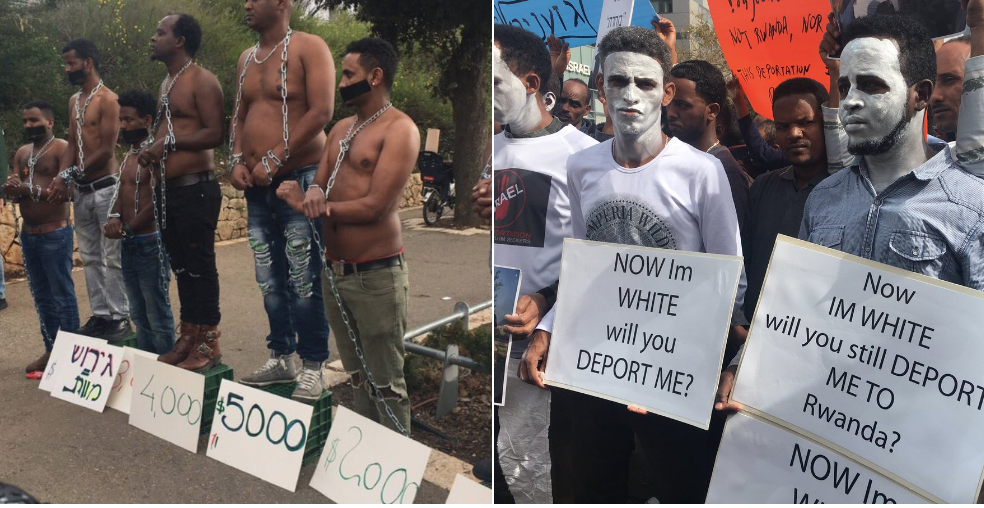 In November, Israel announced plans to deport 40,000 African refugees and shut down the Holot migrant detention centre in southern Israel. Despite criticism from refugee agencies, rights groups and various other groups, the Middle East nation put these plans into effect earlier this month.

Israel has already started jailing asylum seekers indefinitely if they refuse to leave the country. Authorities are giving targeted refugees one month to decide whether they’ll leave Israel voluntarily and those who refuse are given a hearing where they face an indefinite jail sentence.

So far, 600 deportation notices have been handed out, according to Israeli media and thousands more are expected in the coming months. The UN estimates that almost 40,000assylum seekers are currently in Israel. Only 10 people from Eritrea and one Sudanese person have been granted asylum, according to Israeli publication, Haaretz.

The deportation plans currently being executed by Israeli authorities has sparked criticism from rights groups in the country and some pilots have allegedly refused to participate in the forced deportation of refugees from the country. Meanwhile, African asylum seekers across the country are staging protests in various capacities – including hunger strikes at Holot detention centre and a demonstration where refugees are painting their faces white.

African refugees protesting Israel’s deadly deportation plan have held mock slave auctions in public, painted their faces white, and now those in Holot detention camp are putting their lives/bodies on the line in a hunger strike

Pictures are circulating on social media of African refugees holding signs saying “Now I’m white will you deport me?” with their faces painted white. Protests have been staged outside of embassies in Israel, including the Rwandan embassy amid reports that Rwanda and Uganda have struck deals with the Israeli government to accept deported refugees.

Both countries deny there is any such deal in place.

Women, children, fathers of minor children and victims of slavery or human trafficking aren’t being targeted in Israel’s mass deportation. However, two of the people arrested so far were denied asylum despite being survivors of torture, according to refugee rights groups in Israel.

“This is the first step in a what is a globally unprecedented deportation operation, a move tainted by racism and complete disregard for the life and dignity of asylum seekers,” the Hotline for Refugees and Migrants and ASSAF, two Tel Aviv-based refugee rights groups, said in a joint statement last week.

The government is offering targeted refugees $3,500 to leave Israel with the potion of returning to their home country or moving to a third country with Rwanda and Uganda believed to be two options. Refugees who refuse to leave or fail to do so by the end of March face indefinite incarceration. Officials are reportedly hiring civilian inspectors to help authorities investigate and arrest migrants who fail to leave Israel.