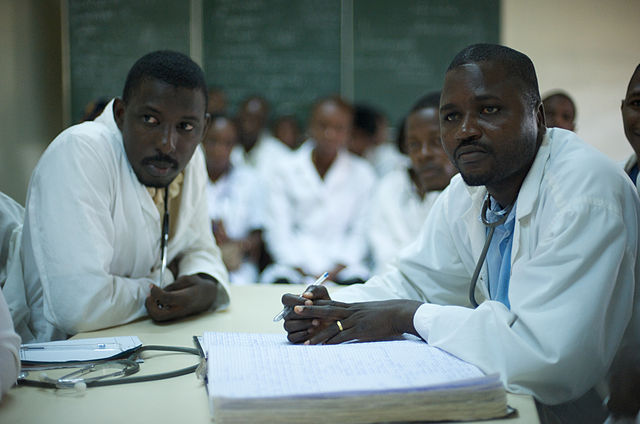 The brain drain of African doctors has cost the continent more than $2 billion, according to Kenya’s Education Secretary, Dr Fred Matiangi.

The Kenyan official urges African nations to stem the number of doctors leaving for work abroad after training which is funded by their home nation. He says countries need to do more to improve education and development, in order to create a more appealing working environment.

“The number of qualified doctors moving abroad to work in the West has been high over the years,” Dr Matiangi said at the 6th Annual Medical Education Partnership (MEPI) Symposium in Nairobi, Kenya.

“Nine sub-Saharan African countries have ended up losing $2 billion as the clinicians seek work in more prosperous nations,” he said.

He says Africa’s brightest medical talent emigrates to the West in search of better pay and working conditions. Ethiopia, Kenya, Malawi, Nigeria, South Africa, Tanzania, Uganda, Zambia and Zimbabwe suffer the most from medical brain drain while Australia, Canada, Britain and the United States benefit most from doctors trained in Africa.

Aside from the cost to African nations, which train medical professionals only to lose them, there are serious developmental effects. These are countries facing serious medical challenges and losing their best talent at the same time.

“The migration of trained health workers from poorer countries to richer ones exacerbates the problem of already weak health systems in low-income countries battling epidemics of infectious diseases like HIV/AIDS and tuberculosis (TB) and malaria and lately, Ebola,” Dr Matiangi said.

He emphasised the importance of better education in African nations as a catalyst for medical development.

“Indeed this is why the Kenyan government has embraced universal basic education to improve enrolment and transition levels.”