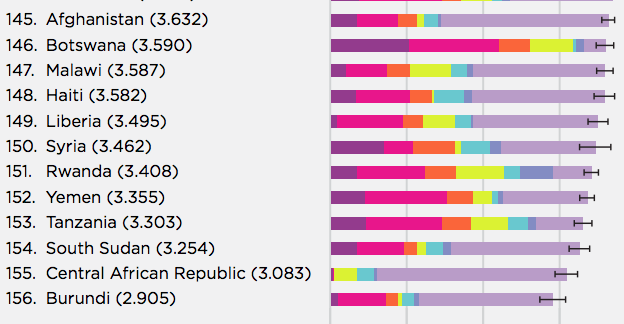 Burundi is the world’s unhappiest nation, according to the World Happiness Report 2018, released on Wednesday.

This year’s report names Finland as the world’s happiest country while Burundi is the least happy of all 156 countries included in the study. Tanzania, South Sudan, Central African Republic and Burundi make an all-African bottom four in the report while Rwanda is the sixth unhappiest country according to its findings.

The World Happiness Report looks at six key factors when compiling its reports: GDP per capita, social support, healthy life expectancy, freedom to make life choices, generosity and perceptions of corruption. The report then calculates a “Dystopia” score based on the performance of each of the six factors and considers this in each country’s overall ranking.

The results don’t look particularly good for parts of Africa with five of the six least happy countries in the world being African, according to the report.

The report also puts a heavy emphasis on the relationship between migration and happiness, which helps explain Burundi’s poor ranking. The small African nation is enduring a political crisis that has killed hundreds and forced hundreds of thousands from their homes.

Unrest began in April 2015 when President Pierre Knurunziza announced he would run for a third term in power. While the government has managed to maintain power and bring an end to significant conflict, grave human rights violations continue to be reported and ethnic divides also complicate a difficult political situation. While the impact of Burundi’s civil unrest and the government’s choice to isolate itself from the international community has caused severe damage to the country’s economy.