Can Burundi avoid crisis with next year’s presidential election? 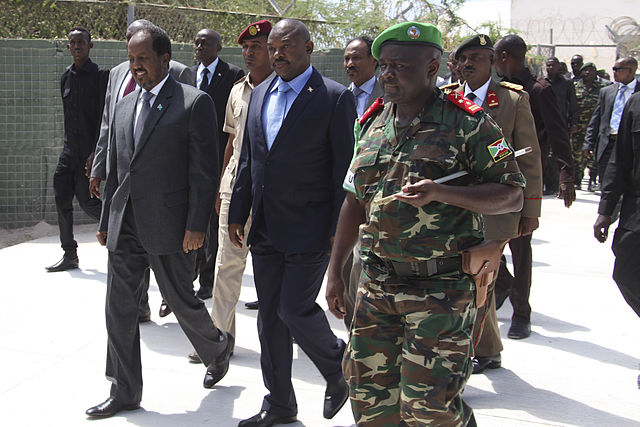 The last time Burundi held a presidential election, the country descended into one of  East Africa’s most volatile civil conflicts. More than 1,200 people have been killed since President Pierre Nkurunziza announced he would run for a third term in the 2015 poll and some 350,000 refugees have fled the country.

The government’s position in the build-up to its last election was anything but secure. On 13 May, a little more than two months before the vote, army general Godefroid Niyombare spearheaded a coup attempt to oust Pierre Nkurunziza from power, following months of brutal crackdowns on protests.

Targeted killings were reported across Bujumbura, the county’s capital city at the time. Grenade attacks against government officials were countered with kidnappings, arbitrary arrests, torture and blatant killings in the streets.

Nkurunziza’s presidency and the thinnest thread of political stability in Burundi constantly appeared to be one incident away from collapse, yet the regime held from one day to the next.

Gradually, Burundi’s government regained its grip on power, one finger at a time. By 2017, Nkurunziza’s position was unquestioned and peace was largely returned to the streets of Burundi. However, to this day, reports of ongoing human rights violations in the country have never stopped and now the country must gear itself up for another presidential election in 2020.

Can Burundi avoid a repeat of 2015 violence?

The most obvious concern ahead of next year’s presidential election is the potential for a repeat of the violence that occurred in 2015. The United Nations believes there’s reason to be cautiously optimistic ahead of the vote, pointing to signs of encouragement while reaffirming the country’s fragile status.

One such sign of encouragement mentioned in the UN’s report was assurances that Pierre Nkurunziza won’t stand in next year’s election.

Shortly after, Nkurunziza himself announced that he will step down next year, despite constitutional changes that legally pave the way for him to run again. This has prompted a bizarre mix of optimism and confusion among Burundi’s political opposition – what remains of it following the crisis that started in 2015.

Burundi’s government has embarked on a campaign of calling for refugees to return to the country – most of whom fled to Tanzania. An agreement now appears to be a deal in place between the two countries to repatriate all Burundian refugees in Tanzania to their home nation, starting 1 October this year.

Tanzania’s announcement of the deal has prompted concern from the United Nations refugee agency, UNHCR, which insists no refugees should be forced to return. Numerous members of the organisation have also questioned whether the political situation in Burundi is safe enough for refugees to return.

At the same time, Burundi is calling for exiled opposition politicians to return, questioning what they expect to achieve outside of the country.

A change in tactics since 2015

Back in 2015, pre-election violence quickly turned into post-election violence as Nkurunziza was announced as the winner of an election boycotted by the opposition. The government’s brutal crackdown on opposition figures and activities only added to the threat of all-out civil war but the government gradually moved towards a different approach in dealing with the political crisis.

The public killings, assaults and kidnappings disappeared from the streets and an eery silence passed over Burundi, as if the country had abruptly awoken to realise it was all a bad dream.

However, given time, the reports of missing people started to emerge along with accounts from Burundian refugees of horrific human rights violations taking place in the country. People were no longer being taken from their homes or killed in the streets in broad daylight; they were simply disappearing altogether and the revelations of what happened to them could take weeks or months to emerge – if at all.

Burundi’s vice-president Gaston Sindimwo insists the country is peaceful. In a rare interview said the country is ready to hold presidential elections next year and called upon all Burundians to be united and vote confidently.

However, the country’s opposition has warned that violence is rising ahead of next year’s poll. The National Congress for Liberty says more than 20 of its offices across the country have been vandalised since March, in an apparent campaign of intimidation. Those responsible for destroying the offices were either left unpunished or arrested and freed without charge.

Opposition figures say members of their party are being assassinated or tortured. Some report having lost fingers or teeth in attacks carried out by the ruling party’s notorious youth league.

The government denies all accusations, insisting a free, fair and peaceful election will go ahead next year. Following the brutality opposition groups and their supporters have suffered in the last five years and the alleged rise of killings and torture behind closed doors, it remains to be seen how much of a political fight the ruling party alternatives will be able to muster.