Can East African leaders push for reforms in Eritrea? 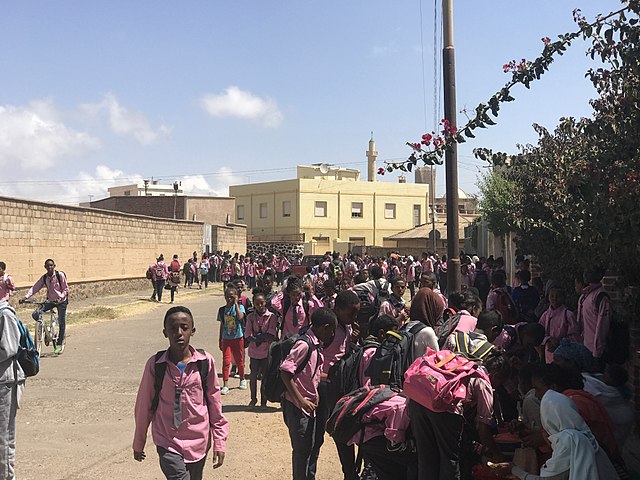 More than a year since Eritrea and Ethiopia stunned the world by signing an unprecedented peace deal, the narrative on human rights issues in Eritrea is the same. Young people continue to flee the country, citing the horrific conditions of forced conscription, religious persecution and torture.

The peace signed between Ethiopia and its neighbour prompted hopes that Eritrea would begin to address its human rights issues – something that still hasn’t happened.

Now, Human Rights Watch is calling upon leaders in East Africa to push Eritrea’s government into implementing reforms that will improve the basic rights of people in the Horn of Africa nation. President Isaias Afwerki’s notoriously-secretive state is now coordinating with regional powers to an extent never before seen during his rule and the rights group thinks leaders should take this opportunity to encourage change.

Who should apply pressure on Eritrea over rights issues?

The biggest problem with regional powers pressuring Eritrea to address its human rights issues is a distinct lack of suitable candidates. To the north-west, Sudan is grappling with regime change after outsing Omar al-Bashir – one of Africa’s most notorious leaders in terms of human rights abuses. Not to mention, Sudan’s ongoing political transition has come with its own string of human rights issues.

To the south-east, Djibouti remains a political opponent of Eritrea with an ongoing border dispute between the two nations still causing tension. For Djibouti, human rights in Eritrea are hardly going to be high on the list of concerns when it will be more interested in the economic and diplomatic competition brought about by the peace deal signed with Ethiopia last year.

In terms of Eritrea’s direct neighbours, Ethiopia stands out as the most suitable candidate to take an interest in the country’s human rights problems. It was Ethiopia’s PM, Abiy Ahmed, that spearheaded peace talks that resulted in last year’s deal and he has since mediated negotiations in Sudan to help the country establish its transitional government.

By first addressing human rights concerns in his own country, Abiy Ahmed has put himself in prime position for regional influence but this is becoming increasingly difficult for him to maintain. While his reformed have drastically improved issues such as human rights, press freedom and political freedom, they’ve also facilitated a growth in ethnic violence that is now threatening his entire regime.

Last year’s peace deal with Eritrea was a major landmark for Abiy Ahmed, cementing his image as a progressive leader and – at least briefly – uniting his country in celebration of peace. However, bilateral relations between Eritrea and Ethiopia aren’t as warm now as they were this time last year and reports of tension along the border have emerged.

Abiy Ahmed is now forced to turn his attention to next year’s election and this is going to greatly influence his political priorities over the next twelve months, if not longer. Above all, there are pressing issues he needs to take care of in his own country if he wants to secure enough votes to carry on as the country’s prime minister.

Meanwhile, in Eritrea, the harsh reality that peace with Ethiopia isn’t resulting in meaningful political change has become apparent.

Last year’s peace deal signed between Eritrea and Ethiopia made a huge impact on the East African and Horn of Africa regions. The subsequent implications reshuffled the balance of power between Ethiopia and Eritrea, of course, but also Somalia, Djibouti and Sudan.

The political landscape in the two regions looks very different in 2019 compared to early 2018 and Eritrea has a large role to play in this.

Landlocked Ethiopia is no longer limited to Djibouti as a trade partner connecting it with the Red Sea and Gulf of Aden. While the economic interests of Ethiopia are significant, Eritrea could be the largest benefactor from this development. For a country that had shut itself off from the world, establishing economic ties with foreign nations and potentially becoming an alternative to Djibouti as a trade and military hotspot could transform the country’s economic prospects.

The problem is none of these interests are directly related to the human rights situation in Eritrea.

East African nations with an interest in the development of Eritrea can fulfil their needs without addressing rights in the Horn of Africa nation – and this will probably continue to be the case until there’s any possible chance of revolution or regime change in the country that could destabilise such interests.

Sadly, the powers most actively involved in Eritrean developments right now (both within and outside of Africa) are yet to show a real interest in the human rights situation. And, in most cases, these powers have less-than-flattering records themselves when it comes to protecting human rights.