Donald Trump has a big decision to make over Sudan sanctions 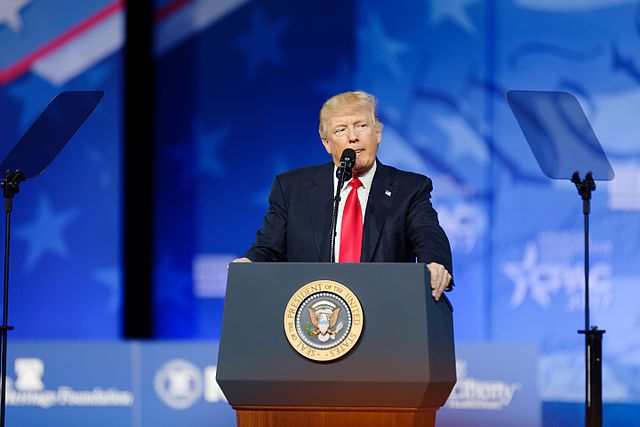 US President Donald Trump has a big decision to make next month regarding sanctions imposed on Sudan. The US president, whose travel ban on Sudan and five other predominantly Muslim nations was partially reinstated this week, will need to decide whether he will completely lift a number of sanctions that were conditionally eased by the Obama administration in January.

Former president Obama argued at the time that Sudan had made significant improvements on the five tracks of engagement required to lift the majority of sanctions held across the country – including cooperation on counterterrorism.

Most experts agree that Sudan hasn’t done enough to justify completely lift those sanctions, but herein lies a problem. Many argue that lifting the sanctions on Sudan will validate its subpar efforts on the tracks of engagement; other say not lifting them at this stage gives the country no reason to continue the progress it has made.

In favour of lifting sanctions against Sudan

Pushing opinion aside for one moment, the case for lifting sanctions against Sudan is actually quite simple. The country has made progress on the five tracks of engagement set out by Washington last year. These are:

For the most part, Sudan has made genuine progress on each point. The country is still listed as a state sponsor of terrorism – alongside Syria and Iran – but Obama marked this turnaround as the key factor in his decision to ease sanctions in January.

Critics often argue Sudan hasn’t taken an active role in counterterrorism, beyond distancing itself from ISIS and Al-Qaeda affiliated groups. Although, others might suggest this is a good start from a country that was once considered a safe haven for terrorists and a supplier of weapons to the likes of Hezbollah and Hamas.

Regarding the Lord Resistance Army (LRA), progress on this track has hinged more on the decline the Ugandan rebel group than Sudan intervention. Likewise, the country dropping its support for armed groups in South Sudan is an achievement through inaction.

The sticking points for Sudan are the situations in Darfur and the Two Areas, plus improving humanitarian access. Conflicts continue to break out in Darfur and the Two Areas but the extent of government involvement remains unclear. Meanwhile, humanitarian access remains an issue in the country, but the requirements set out by the US on this track is criticised by some for being too vague.

The popular question is: has Sudan made enough progress to justify lifting the sanctions?

The argument against lifting the sanctions

The argument against lifting sanctions on Sudan starts with the obvious answer the question above – that it hasn’t done enough on the five tracks warrant the lift. This is a huge area of debate, of course, and there’s no point adding another opinion into the mix.

The facts are more important. Like the outstanding arrest warrants for Sudan President Omar Al-Bashir, issued by the International Criminal Court (ICC). The first was issued in 2009; the second in 2010 and, almost a decade later, ” the suspect is still at large” (ICC website).

More importantly, there are the reports of ongoing attacks against civilians in the Darfur region. This is in breach of one of the key tracks Sudan is obliged to meet in order for sanctions to be lifted – and arguably the only one that hasn’t been partially resolved by default rather than effort.

However, this comes at a time when the United Nations is pulling out around 6,000 peacekeeper troops and officers from the Darfur region, amid budget cuts. The Trump Administration has been the loudest voice in the campaign to reduce the budget for UN peacekeeping missions.

So now would be a perfect time for Sudan to take the initiative on the Darfur region, but it’s a bit rich for the US (and any United Nations member states for that matter) to accuse the country of not doing enough.

Whether this diplomatic hypocrisy plays a part in Trump’s decision over sanctions against Sudan will remain a mystery. However, it will be interesting to see what move the US takes next. The obvious compromise would be to further relax sanctions with the promise of removing them entirely, based on a new or amended set of requirements.

Then again, Trump hasn’t exactly shown the behaviour of a man of compromise during his first six months in office.