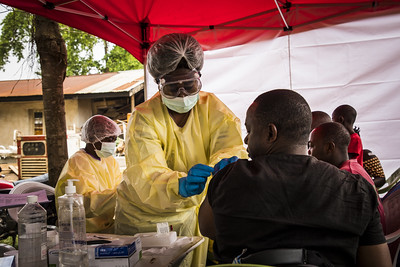 A journalist in the Democratic Republic of Congo (DRC), known for raising awareness about the country’s ongoing Ebola crisis, has been killed in his home.

According to army officials, unidentified attackers raided the home of Papy Mumbere in Lwemba and killed him. The journalist’s wife was also injured in the raid before the attackers burned down their house. People working to stop the spread of Ebola in the DRC are often targeted in violent attacks.

The DRC is experiencing the second-largest Ebola outbreak in history with 2,185 confirmed deaths and 3,274 cases of the disease having been reported as of November 3, 2019. However, many people in the country believe the outbreak isn’t real, suspecting health workers and other people working to prevent the disease of foul play.

Health workers in the country have been attacked 300 times this year with six being killed and 70 wounded since the start of the year, according to authorities in the DRC.

This week, the World Health Organization’s Dr Mike Ryan, who is chief of ongoing efforts to tackle Ebola in the DRC, condemned the violence taking place against those working to tackle the disease.