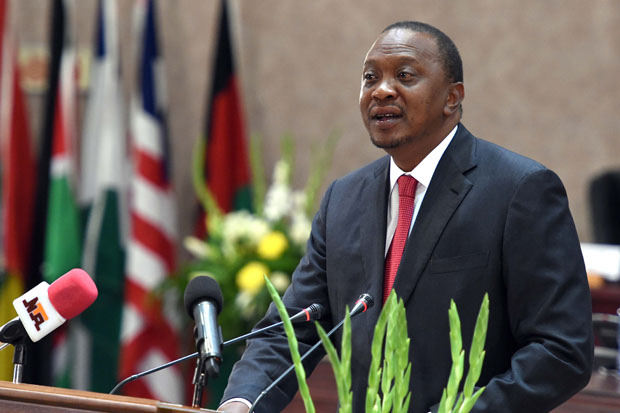 Kenyan President Uhuru Kenyatta has assured Kenya that the country’s economy is in good shape, despite claims from opposition groups.

The president moved to counter criticism that his government has been running the economy on ‘autopilot’ and allowing corruption to thrive in the country. Speaking at a catholic church in Ridgeways, Kiambu County, he insisted that “Kenya is fine” and called on citizens to remain united.

The Kenya President made a point of highlighting opposition members’ right to freedom of speech, following the recent criticism of his government. Although, he asked Kenyans to ignore the noise of claims that Uhuru’s administration has been “overborrowing, overspending and overstealing.[sic]”

We are hearing a lot of noise against Jubilee Government, but the country is doing well. There is no problem; people are just making empty noises,” the president assured people during a fundraiser for the church.

This comes in response to scathing comments recently made by popular politician and Cord leader Raila Odinga, in his latest attack on the ruling party’s administration.

Last week the Kenyan Government claimed a raft of measures had been put in place that will transform the nation’s economy. Deputy President William Ruto said recent reforms and improvements to the business environment will attract fresh interest from overseas investors and create new jobs within the country.

As things stand, borrowers are struggling to manage their debts, amidst rising interest rates and the declining value of the nation’s currency.

Question have also been raised about the Jubilee Government’s use of a $2.75 billion Eurobond loan. One year since the bond was revealed as a way to “stop government borrowing from domestic markets,” the government is reported to be seeking $750 million in loans from local banks, in order to pay civil servant wages.

Opposition members claim the government has miss-spent and hoarded chunks of the Eurobond as part of an ongoing system of corruption within the country.