Eritrea blames US for border conflict that killed 70,000 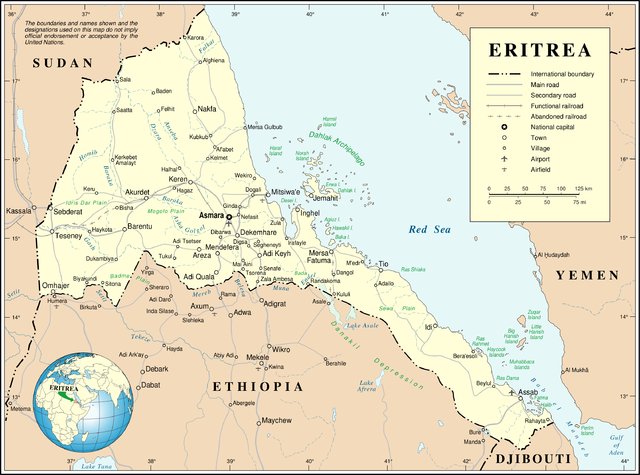 Eritrea President Isaias Afwerki has blamed the US for a border conflict with Ethiopia that killed an estimated 70,000 people between 1998 and 2000.

In a letter to unnamed heads of state earlier this month, Afwerki accused Washington of driving a wedge between Eritrea and Ethiopia, according to reports from state-run media outlet Shabait.

“The ‘border dispute’ was a simple ruse as the boundary between the two countries was defined and determined without any ambiguity in colonial times,” the president allegedly says in the letter.

“But Washington feverishly worked at the time, through the State Department, to drive a wedge between the two peoples who have deep historical and strategic ties in order to foment a crisis and micromanage the affairs of the Horn of Africa.”

In the same letter, Afwerki apparently calls on heads of state to place pressure on the UN to reverse an arms embargo placed against it after the Security Council claimed the Eritrean regime was supporting Al-Shabaab fighters in Somalia.

Afwerki claims the US and the wider international community “concocted a fictitious case” against Eritrea, in order to “impose unwarranted sanctions against the country”. He insists it is time for the sanctions to be lifted and the “incessant attacks” against his country to stop.

Relations between Eritrea and Ethiopia remain tense while the Horn of Africa nation has another border dispute with neighbouring Djibouti. Eritrea gained independence from Ethiopia in 1993 after a 30-year war for independence. However, war broke out between the two countries in 1998 – a conflict Afwerki is now blaming on Washington – which killed an estimated 70,000 people before it ended in 2000.

The situation between Eritrea and Ethiopia since the war ended in 2000 is characterised as: “no war, no peace”.