Ethiopia Pulls Troops Out of AMISOM 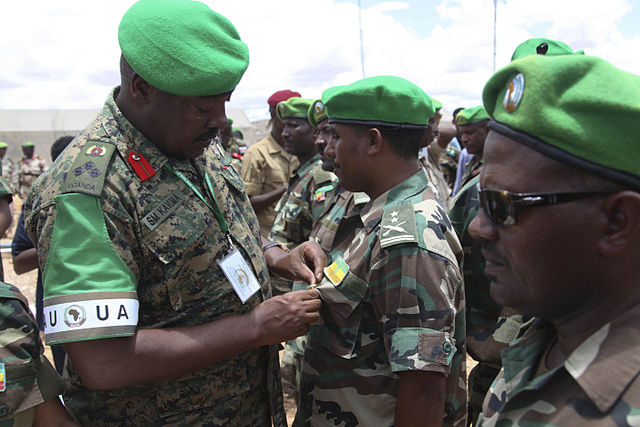 Ethiopia is pulling more out troops from the African Union Mission in Somalia (AMISOM), raising concerns over an Al-Shabaab resurgence.

Troops have already withdrawn from numerous posts in Somalia, allowing the militant groups to claim them without opposition. Many experts suggest the withdrawal is due to the growing unrest back in Ethiopia, although the government denies this is the case.

AMISOM spokesman Joseph Kibet Murrey told VOA that the withdrawal of Ethiopian troops will leave a vacuum in the “mission”.

“That will now force AMISOM to rethink on how we are going to take back those positions and keep those positions. Definitely it will affect our operations, and our planning,” he said.

Meanwhile, Ethiopia denies claims that its decision has anything to do with security issues back home, which prompted the prime minister announce a state of emergency”.

“[The withdrawal] has nothing to do with the state of emergency,” government spokesman Getachew Reda told the press.

Instead, he cited the “financial burden” and “lack of support” as the influential factors.

The main concern is that Ethiopia pulling out will give Al-Shabaab a dangerous advantage over the Somalia and AMISOM forces. The group has already managed to claim back numerous towns where Ethiopian troops were previously stationed.

AMISOM is struggling to cope with Al-Shabaab’s efforts to caim back territory and losing Ethiopia is a massive blow to the mission.

However, officials are keen to point out Ethiopia isn’t obliged to support AMISOM. The country isn’t officially part of the mission but offered troops voluntarily until now.

Somalia’s defense minister, General Abdulkadir Ali Dini, highlighted in this when speaking to VOA recently. He reiterated the fact Ethiopia is under now obligation to contribute troops to AMISOM and acknowledged the country’s need to put its own interests first.

He also says Somali needs to use this situation to strengthen its own national army and become more self reliant.

“Defending the country is the job of every Somali. If you don’t build your national army the anti-peace elements will continue to cause problems,” he told the publication.