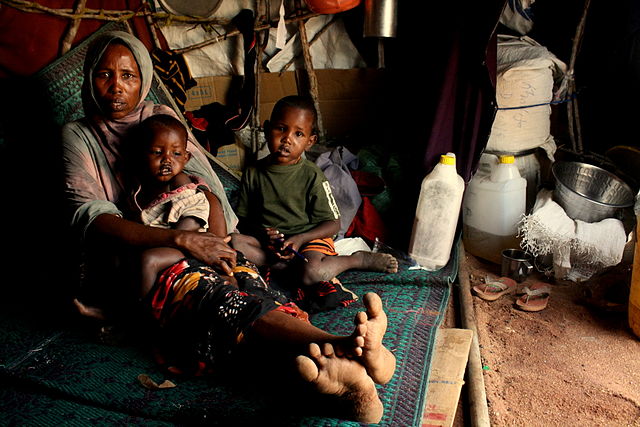 Back in May, Kenya warned the international community it would close the world’s largest refugee camp. At the time it wasn’t clear whether President Kenyatta really intended to close the camp or was simply calling out for more international support.

However, Kenya appears to have settled any doubts by confirming the camp will close. Furthermore, the government says it intends to move almost half the camp’s inhabitants by the end of 2016.So it seems the fate of Dadaab has already been sealed and the world’s largest refugee camp is set to close.But what’s going to happen when almost 350,000 refugees are sent back to the country they originally fled or told to settle elsewhere?

So it seems the fate of Dadaab has already been sealed and the world’s largest refugee camp is set to close. But what’s going to happen when almost 350,000 refugees are sent back to the country they originally fled?

Kenya’s reason for closing Dadaab is simple: it sees the camp as a threat to national security.

“For reasons of pressing national security that speak to the safety of Kenyans in a context of terrorist and criminal activities, the government of the Republic of Kenya has commenced the exercise of closing Dadaab refugee complex,” Kenyan interior minister, Joseph Nkaissery, announced in May.

Kenya’s concerns are validated, too. Dadaab’s residents are almost entirely Somali refugees and the camp’s proximity next to the border of Somalia is a worry. Kenya believes the camp has been used to smuggle weapons and terrorist fighters into the country from Somalia.

The camp lies about 60 miles from Garissa University, where 142 students were killed last year in an attack by Al-Shabaab militants. Kenya is one of the largest contributors of troops fighting against the terrorist group in Somalia. Al-Shabaab has singled out Kenya as a target for its military presence. A string of attacks on Kenyan soil in recent years have killed hundreds of its citizens.

If Kenya can justify its decision to close Dadaab, it will be because the move makes Kenya a safer country. It’s always a possible weapons and Al-Shabaab fighters have managed to enter Kenya through the camp but it’s an odd choice of entry.

A far easier point of access is Mandera County to the north of Garrissa, where Al-Shabaab fighters have been spotted crossing the border on many occasions. The region is a regular target for Al-Shabaab militants crossing the border. On Friday two buses were attacked in Mandera by gunmen, killing at least six people.

So it’s difficult to see how closing Dadaab will be a major benefit to security concerns in Kenya. In fact, it seems more likely to make them worse.

What happens when Dadaab closes?

Somali refugees don’t make the decision to flee their country on a whim. These are people who have faced more than poverty: insurgency, rape, kidnapping and other grave forms of violence are rife in Somalia. Meanwhile, their government is so stretched in its battle against terrorism it simply can’t protect or provide for its people.

Somalis caught in this situation don’t get help from anyone; they’re generally left with three options. First, they can face whatever comes their way and continue living in fear for themselves and their family. Next up, they have the option of fleeing the country and settling for life as a refugee. The only other option is joining Al-Shabaab, knowing it will provide the security their family needs to survive.

That last option is a threat to Kenya and Somalia when 350,000 refugees are sent back home. With the option of fleeing taken away from them the only way to survive for many will be joining the terrorist group Kenya has been so plagued by in recent years.

If Kenya is serious about security, get AMISOM in order

If Kenya is serious about removing the threat of Al-Shabaab, there are only two options that can really work. Either pull out all of its troops from Somalia and hope the militant group forgives all. Or fight to strengthen the African Union Peacekeeping Mission in Somalia (AMISOM).

The weaknesses of AMISOM have become increasingly apparent over the last few years. Al-Shabaab has made a comeback to the point where attacks in the Somali capital are a constant threat. This says more about the failings of AMISOM than the ingenuity of the terrorist organisation.

Kenya’s role in AMISOM has been paramount but no country has suffered more from its failings, aside from Somalia. So Kenya needs to take the initiative here – by dedicating more to AMISOM and demanding other nations do the same. Funding is the problem facing UN peacekeeping missions at this stage but Kenya needs to make its case heard.

At first the threat of closing Dadaab refugee camp looked like perfect leverage to force the hands of the UN and African nations to increase their efforts. However, it now seems Kenya is ready to come through with its threat and close Dadaab.

By Oxfam East Africa – A recently arrived family in Dadaab, CC BY 2.0, https://commons.wikimedia.org/w/index.php?curid=35678461