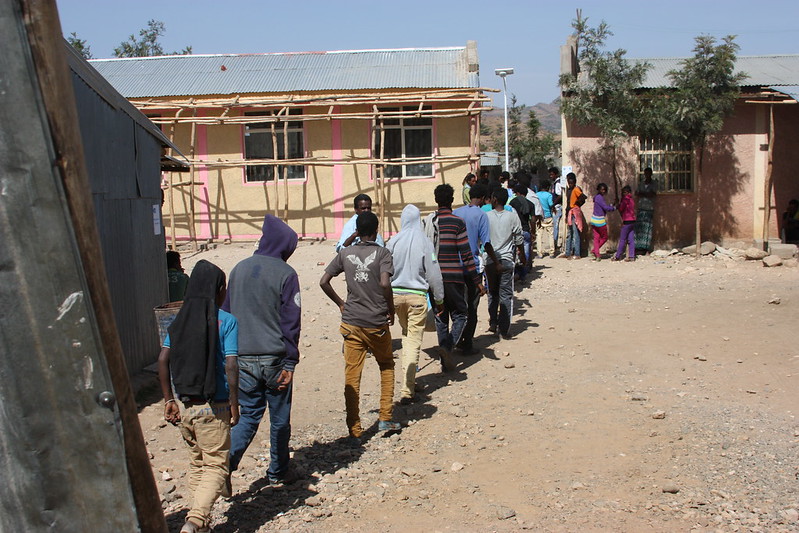 The European Union (EU) is spending millions on projects built by Eritrean people in forced conscription, according to a scathing new report published in The New York Times.

In the report, Matina Stevis-Gridneff details how the EU spent €20 million in Eritrea last year to build a road, as part of the union’s effort to stem the exodus of Eritrean migrants by improving the infrastructure and quality of life in the country. However, the same project has been found to use forced conscripts – Eritreans enslaved in a military service programme that is known to be the number one reason people in Eritrea flee the country.

Exclusive: The EU is boosting its spending in #Eritrea with minimal monitoring of the use of forced conscripts in its road project — our deep dive into Europe‘s shifting engagement w Eritrea’s dictator, and handing euros no-strings-attached https://t.co/nsRW6NqQZx via @NYTimes

The EU’s controversial road project was widely reported at the time, causing international outrage among rights groups. However, Stevis-Gridneff’s article exclusively reveals that a further package of funds to the sum of €95 million was sent by the EU to Eritrea, despite the questions raised over the initial road project.

This is the first time the direction of additional funds has been reported, revealing that the EU continues to fund a system of forced conscription that has been described by the United Nations and rights groups as modern slavery.

The EU is continuing to fund enslavement in Eritrea

After the global attention and controversy surrounding the EU’s €20 million packages being used to build roads by Eritrean conscripts, you would have thought the bloc had learned a lesson about the lack of control it has over funds being directed to the Horn of Africa nation. And, considering that European nations are the first non-African nations that Eritrean refugees attempt to reach, you would imagine the union is reluctant to fund a conscription programme that compels thousands to flee the country every month.

Despite all of this, the bloc continues to send funds to Eritrea.

The EU just allocated €95 million to #Eritrea – @MatinaStevis looks at the risks the EU is willing to take to stem migration from one of the world's most repressive states, including indirectly supporting the ongoing use of forced labour https://t.co/XzVIw1EJ92 https://t.co/TLwdn1k3pz pic.twitter.com/CQWL5414Ip

“The European Union is spending tens of millions on projects built by people suffering under indefinite conscription in Eritrea, according to a new report in the New York Times,” Human Rights Watch said in its own summary of the report published in The New York Times.

Funding ‘one of the worst dictatorships in the world’

Writing for Open Immigration on the topic of Eritrean refugees fleeing the Horn of Africa nation, Alessandro Lanni described the plight of people living in the country.

“Fleeing compulsory military service and one of the worst dictatorships in the world, Eritreans cross the Mediterranean and arrive in Italy,” he said. “Surprisingly, though, none of them wants to stay,” he wrote, referencing the common misconception that Eritreans are flooding the Mediterranean.

Indefinite conscription is the main reason people flee Eritrea. Why do EU leaders think that reinforcing this systematic horror will make people want to escape it less?

The situation in Eritrea is no secret to the international community and the reasons so many people flee is widely known. Back in 2015, Amnesty International cited forced conscription as the main reason Eritrean refugees attempt the deadly journey across the Mediterranean. It was hardly the first report to draw this conclusion and it certainly wouldn’t be the last.

Equipped with this knowledge, it seems surprising that an institution like the European Union would continue to fund projects supported by the same conscription programme that is creating so many refugees.

To make matters worse, the funds are coming from a €4.6 billion European Union Trust Fund for Africa that was created at the height of the refugee crisis in 2015 to “address the root causes of migration.”

The EU’s contradictive approach to the migrant crisis

While the European Union Trust Fund for Africa was largely seen as a positive move with a worthy goal at the time it was announced, it’s implementation has drawn criticism. Not surprisingly, rights groups have called the fund counterproductive and the links between EU funds and forced conscription in Eritrea make a solid case for this argument.

Asylum seeker numbers from Eritrea remain consistently high with at least 5,000 Eritreans seeking asylum in Europe every year over the past decade. At the height of the refugee crisis in 2015 and 2016, more than 30,000 Eritrean refugees sought asylum in Europe.

According to the European Union statistics agency, 80 percent of Eritrean asylum requests are approved, suggesting EU nations consider the vast majority of Eritreans to be legitimate refugees. So why is the European Union continuing to fund a system that’s know to be the largest contributor to creating Eritrean refugees in the first place?

At the same time, the EU is ramping up efforts to secure its borders through controversial agreements with Turkey and Libya that have detained thousands of African refugees in horrific conditions.

In early 2019, the EU declared the migrant crisis over and hit out at criticism over its handling of the issue. However, campaign groups quickly responded by accusing the bloc of turning a blind eye to a problem that continues to escalate.

More to the point, this is now a crisis that the EU is known to be contributing to.