Indian prime minister Narendra Modi has just returned from his first visit to the African continent. Over five days he visited four countries to meet their respective heads of state: Kenya, Tanzania, Mozambique and South Africa.

His African tour was symbolic in many ways: “For me personally, this visit is an opportunity to pay homage to two of the greatest human souls to have ever walked this Earth,” he said upon his arrival in South Africa. A fitting reference to Mahatma Gandhi and Nelson Mandela.

Modi is also the first Indian prime minister to visit Mozambique in 34 years – another symbolic milestone. However, the PM’s visit to Africa – and these four countries in particular – highlight some of India’s most pressing foreign policy issues. And, unlike a lot of media coverage would have you think, it’s not all to do with China.

The great race for Africa

Much is said about the diplomatic war between India and China to secure Africa as a trading partner. It’s the so-called race for Africa where every win for India is a loss for China and vice versa. One look at Africa’s export statistics an you can see how close the two nations really are: 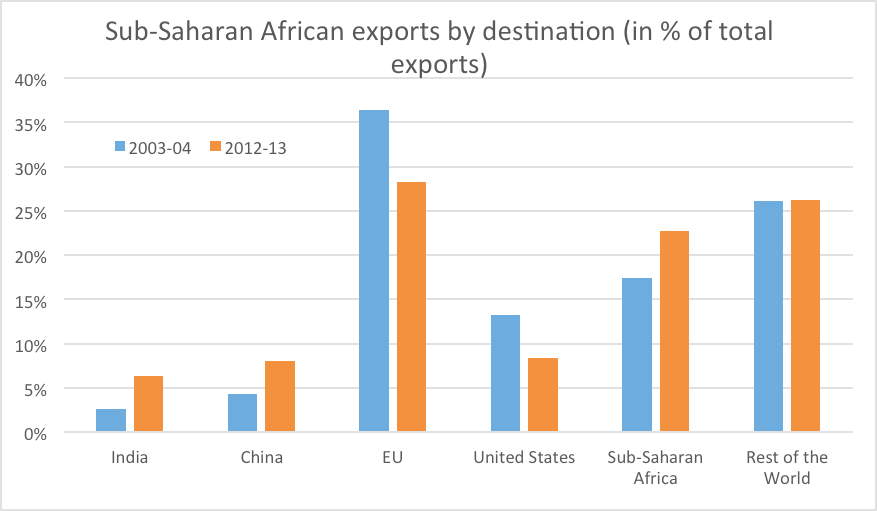 The usual assumption is China and India are only interested in Africa’s natural resources. But this wouldn’t explain India’s largest car manufacturer setting up in South Africa or Essar Group investing in Africa’s steel sector. You could say the same for China’s growing investment in green power across the continent, too.

The fact is Africa’s growth makes it a new, promising market in a wide range of industries for both India and China. From Telecoms and agricultural trade to consumer goods, Africa is an attractive prospect.

The race for Africa isn’t purely about trade, either. China’s decision to build a naval base in Djibouti is a cause for concern in India. There’s a long-standing fear that China is attempting to create a “string of pearls” around India through military and commercial ties.

China’s “string of pearls” by EdgarFabiano – Own work, CC BY-SA 3.0

It’s no coincidence Modi visited four key nations along the east coast of Africa, resting along the Indian ocean. Aside from protecting trade routes, these are strategic locations India won’t want to see China dominate.

Beyond the race for China

While India’s concerns over Chinese investment in Africa are very real, there’s a much wider agenda behind Modi’s visit. India’s interests in Africa are diverse and many of them have nothing to do with China whatsoever.

Successive drought years in India mean one of its staple foods is at risk. The price of pulses – or “daal” as they’re often called in India – has doubled over the last 18 months. The shortage affects millions of Indians who rely on them to survive and Mozambique provides a solution. A deal signed between the two countries means 100,000 tonnes of pulses will move from Mozambique to India over the next 12 months. That figure is expected to double within four years.

As Kenya’s medical costs increase, quality fails to match. India can offer better services at cheaper prices, which is why 10,000 Kenyans travelled to India for treatment in 2015 alone. That’s almost $100 million in a single year from one nation. Medical tourism is taking off in India and Africa is a key player.

Piracy refuses to go away

The Indian Navy has been instrumental in battling piracy along the East African coast. Warships now patrol the Somali coast where the issue is most prevalent. However, pushing these pirates out of Somali waters means many attacks now take place closer to India than Africa.

“Our companies can also pool their capacities to jointly develop or manufacture defence equipments and platforms. And, not just to meet our defence needs, but also to respond to regional and global demand,” he said.

Racial tension is another issue the Indian PM is keen to resolve with African leaders. This is especially true in South Africa where violence against Indians can be a problem. However, it’s a rise in attacks against Africans in India that dominated this year’s headlines. It’s a concern that taints Mr Modi’s homage to Mahatma Gandhi and Nelson Mandela – something he wants to rectify.

To say India’s interests in Africa are purely about natural resources or countermeasures to China would be flippant. Those are important issues, of course, but Africa has far more to offer than oil and territory. India and China tend to get a lot of attention for their interests in Africa but they pale in comparison to other investors.

The US and EU dwarf investment from the two Asian countries and there’s more money circulating between African nations themselves than India and China’s investments combined. While India and China’s economic landscapes mean they have more to gain than most, outside of laying their hands on natural resources. And Modi’s recent visit has offered new insights into how important African-Indian ties could be for development on both parts.

By Narendra Modi – Text of Prime Minister’s remarks at the concluding session of the National Workshop on “Make in India”, CC BY-SA 2.0, https://commons.wikimedia.org/w/index.php?curid=37682479