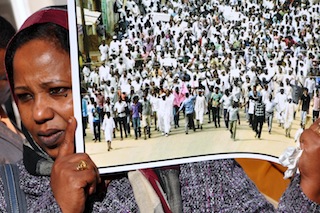 An inquiry carried out by Physicians for Human Rights (PHR) has found that Sudanese authorities orchestrated an attack against pro-democracy demonstrators on 3 June 2019 that may have killed as many as 241 people.

The rights group based its findings on interviews with 37 survivors of the massacre, which echoed similar findings published by Human Rights Watch (HRW) last November that described the attack as “targeted and intentional”.

The inquiry published by PHR describes the 3 June shooting as “a planned, systematic attack” against pro-democracy protestors.

“While further investigation is warranted, the contours of what transpired on June 3 are clear,” the rights group says in its report. “Witnesses described seeing a large mass of armed men in uniform, outnumbering the demonstrators in some areas by as many as 10 to 1.”

The report includes the stories of 30 people who survived the attack and witnessed some of the horrific events that took place, including attacks against doctors and other healthcare professionals, preventing them from treating injured protestors. Witnesses recognised security officers in the distinct uniforms of riot police, RSF and NISS forces.

“Interviewees described attackers wearing the regulation RSF uniform, a well-known beige camouflage with a red hat for officers, and beige or maroon hats for lower-ranking soldiers, with beige boots. Others reported seeing the NISS uniform, which is similar to but distinct from that of the RSF.[62] Some witnesses reported seeing forces in riot police uniforms of either dark blue camouflage or plain blue, with black or beige boots. At least some of these appeared to be brand new and ill-fitting.”

When the security forces began to attack protestors engaged in a sit-in demonstration at 5am on June 3, survivors said that army personnel at the site denied to protect them, as they had done in previous weeks.

“Witnesses reported that Sudan Armed Forces personnel had been told not to get involved if an attack against the protesters occurred, and that the army, navy, and air force had been disarmed, an allegation repeated in media reports after June 3.”

Witness accounts suggest much of the shooting was from surrounding rooftops and elevated structures, such as the railway or the al-Bashir Medical City Center, further suggesting the massacre was a planned and coordinated attack.

Featured image: “Woman holds a picture of the protests in Khartoum, while demonstrating outside the Sudanese Embassy in London. Oct. 4, 2013 (Photo: Izzeldin Taha)” flickr photo by Sudan Tribune https://flickr.com/photos/93456065@N06/10103105426 shared under a Creative Commons (BY-NC-SA) license