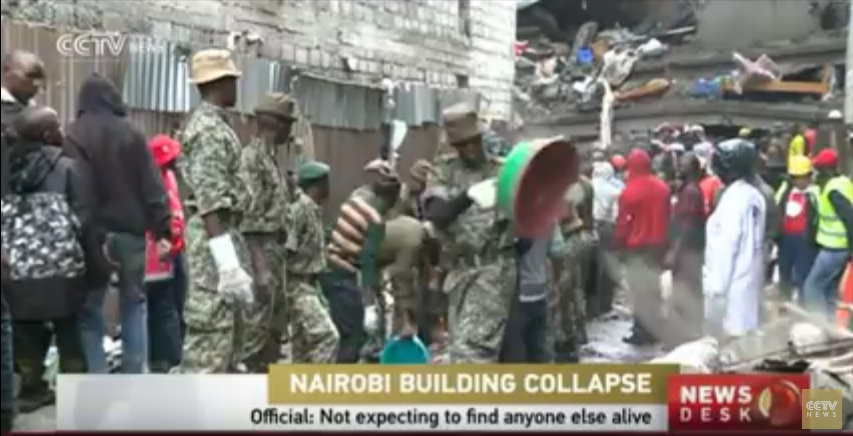 At least 21 people have been killed and many more feared dead after a six-storey building collapsed in Nairobi following days of torrential rains and flooding.

Rescuers have pulled out hundreds of survivors since the collapse on Friday but dozens more are feared to still be trapped inside, with little hope for survival at this late stage. The Kenyan capital has endured heavy rains and flooding for days and Nairobi Governor Evans Kidero warns there is more to come.

Kenya President Uhuru Kenyatta arrived at the Huruma building soon after news of the collapse broke and he’s since ordered the arrest of the building owner. The Nairobi country government revealed the building was never approved by City Hall.

“[It] is too close to a river and there is no way the county could approve it.” Deputy governor Jonathan Mueke said on Saturday.

Houses near the collapsed building have also been declared unsafe although the status of their approval by City Hall is yet to be clarified. An investigation will be organised after the initial rescue mission is completed, but Mueke’s message to the residents in unsafe houses was clear.

“Everybody living in the house should move out. The key thing is safety and saving of lives,” he told the press.

The building collapse is Nairobi’s biggest wound from the heavy rains and flooding but the impact has hit other parts of the city hard as well. The county government has called an emergency meeting to discuss handling the disaster with the threat of more rain looming.

Four people were also killed on Friday as they tried to shelter from the rain when the DoD wall collapsed along Lenana Road. Three others were reported dead along Lusaka Road when floods hit the area and the damage to property has been widespread.