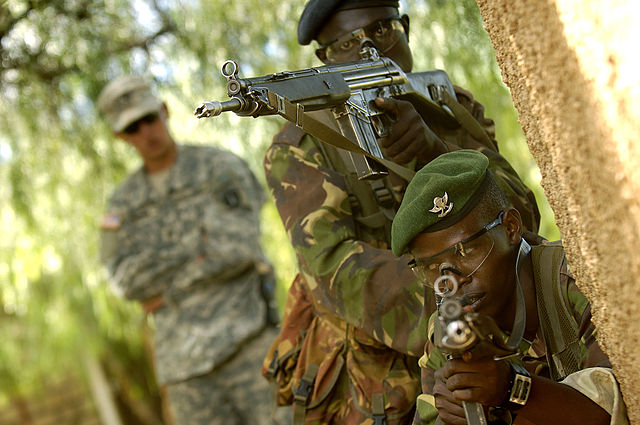 Kenya President Uhuru Kenyatta has confirmed that Kenya Defence Forces (KDF) will remain in Somalia, despite the withdrawal of troops from key bases within the country.

As many as 100 KDF troops are said to have been killed in a recent Al-Shabaab attack on a base in al-Ade, according to the militant group itself. The Kenyan government is yet to reveal how many soldiers were lost in the attack, although it has since pulled out of the area, in addition to another key base in Badhade.

Kenya committed to fulfilling its mission

Despite pulling out of two bases in close proximity to the Kenyan border, President Uhuru Kenyatta insists his country is committed to fulfilling its mission against terrorism in Somalia.

“We will continue in Somalia to fulfil our mission. Some, whose courage has failed, want to give up the mission now,” the president recently said.

Attacks carried out by Al-Shabaab on Kenyan soil have been common since the African nation sent troops into Somalia back in 2011. Kenya is seen as one of Al-Shabaab’s greatest enemies and its shared border with Somalia makes it a prime target for attacks. Al-Shabaab militants regularly cross into Kenya to carry out attacks near the border, plus a number of attacks in major cities that have killed hundreds of civilians.

If Al-Shabaab figures prove to be correct, the killing of 100 KDF troops would be the worst attack on Kenya’s forces since it entered Somalia in 2011. President Kenyatta was quick to pay tribute to those lost in the fight, but no official figure for the death toll has been released.

Despite this, and numerous attacks against Kenyan civilians in recent years, the president insists Kenya will never surrender to terrorism. The East African nation has little choice either, as Somalia succumbing to Al-Shabaab would have major consequences across the region, with Kenya among the worst affected.

“This is not the time to waver or listen to the voices of defeat. This is the time for the people and the government of Somalia to choose peace,” President Kenyatta insisted.