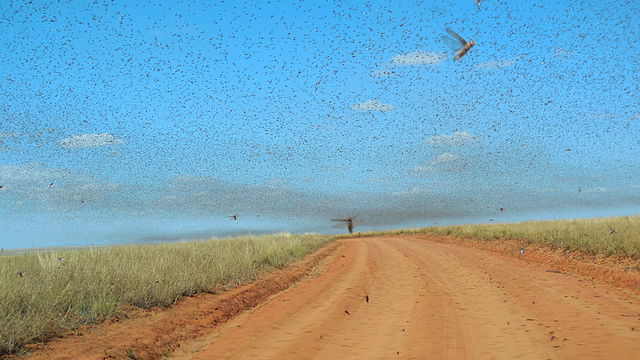 Swarms of desert locusts that are already destroying swathes of crops across East Africa have now reached crisis-stricken South Sudan.

The world’s youngest nation is already struggling with hunger, food shortages and economic crises after years of civil war, which only officially ended with a tentative peace deal last year. However, now the country faces an entirely new crisis after swarms of locust reached the country in what’s proving to be the region’s worst outbreak in decades.

Kenya, Somalia, Eritrea and Djibouti are all battling their worst locust outbreaks in decades and swarms have also moved into Sudan, Tanzania and Uganda. the crisis has already engulfed much of the region and the United Nations has warned that numbers of the destructive insect could multiply a further 500 times by June.

Desert locusts can travel up to 150km in a day and eat their own body weight in crops before moving on to the next source of food. The United Nations says a swarm of one kilometre squared can consume as much food as 35,000 people in a day.

Climate change has been attributed to the dramatic presence of desert locust in East Africa this year with warm temperatures and unprecedented rainfall creating the perfect breeding grounds. The swarms initially crossed over the Red Sea and the Gulf of Aden into the Horn of Africa where they are now known to be breeding in parts of Somalia, Sudan and Djibouti.