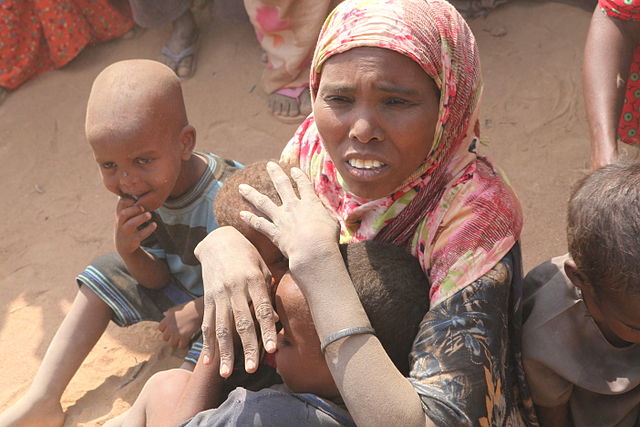 When there’s not enough food in the family, mothers are forced to choose which of their children eat. This is the reality of Fatuma Abdille, a Somali mother who told her heartbreaking story to the media last week – and she’s not the only mother in Somalia facing a similar agony.

“If there’s a very small amount of food, we give it to those who need it the most – the youngest,” she told Reuters. Abdille is a mother of seven who brought her family to Mogadishu two weeks ago after their herd of goats died from starvation.

Last month the UN declared famine in South Sudan, the first time it has made this kind of announcement since 2011. Now it says the world faces its most serious humanitarian crisis since World War II – the worst in the organisation’s history – with Nigeria and Yemen also in need of immediate aid.

Meanwhile, the head of German NGO Menschen für Menschen (People for People) this week warned that Ethiopia is at risk of slipping into another famine if it doesn’t receive the support it needs from the international community.

More than 25 million people across South Sudan, Somalia, Ethiopia and Kenya need urgent humanitarian assistance – far more than today’s humanitarian system has ever had to cope with. While Angola, Botswana, the Democratic Republic of Congo, Kenya, Lesotho, Madagascar, Malawi, Mozambique, Nambia and Zimbabwe are all dealing with food shortages of their own.

The impact of El Niño – the most damaging since 1982 – has been disastrous and the widespread food shortages are proving too much for Africa and the international community to cope with.

UN Secretary-General for Humanitarian Affairs, Stephen O’Brien, told the United Nations on Friday that more than 20 million people in Nigeria, Somalia, South Sudan and Yemen alone are facing famine at this time.

“Already, at the beginning of the year, we are facing the largest humanitarian crisis since the creation of the United Nations,” he told the council.

The UN and international food agencies define famine as food shortages that leave more than 30 percent of children under the age of five suffering from acute malnutrition and more than one person in every 10,000 dies every day from starvation and related illnesses.

The list of countries experiencing food shortages is long, but it’s Nigeria, Somalia, South Sudan and Yemen that are causing the greatest concern for the UN and food organisations the most.

O’Brien is calling for immediate funds to be dedicated to the four countries and unimpeded access to the worst hit areas so aid can be provided.

The UN says 10.7 million people in Nigeria are in need of humanitarian aid – one of the largest groups facing food insecurity in this growing crisis. Nigeria’s seven-year battle against extremist group Boko Haram has contributed to the country’s plight, killing around 20,000 people and forcing more than 2.6 million to flee their homes.

The Nigerian government denies the risk of imminent famine in the country, despite widespread malnutrition in the northeast. The country’s Minister of Agriculture and Rural Development, Chief Audu Ogbeh, criticised agencies earlier this month for insinuating the entire country is experiencing the same problems as the northeast.

“I don’t think that the rest of Nigeria is facing any threat of famine. That is not true and I think these agencies have to be a little more careful in their prognoses,” he said.

Of course, the same can be said for any country facing a food crisis. However, the UN reports such severe malnutrition in the northeast that some adults are too weak to walk and some communities have lost all of their toddlers.

Famine has returned to Somalia after six years, this time leaving 6.2 million people – more than half the country’s population – in need of immediate humanitarian assistance. The UN estimates that one million children under the age of five will be acutely malnourished this year.

Getting aid to those who need it is a challenge in Somalia, as well, with terrorist group Al-Shabaab bringing insecurity to an already critical situation. However, the UN’s presence in Somalia is more widespread than in many countries, meaning it can make a real impact if the funds are there.

“To be clear, we can avert a famine,” O’Brien said. “We’re ready despite incredible risk and danger … but we need those huge funds now.”

In South Sudan, more than 7.5 million people are in need of aid – a 1.4 million increase from last year. To put that into context, South Sudan’s total population is less than 13 million, meaning more than half the country is at risk of starvation.

The world’s youngest nation can’t blame El Niño or drought for its food shortage, however. As Stephen O’Brien puts it, “the famine in South Sudan is man-made”, a result of the country’s vicious civil conflict between government and rebel forces.

An estimated 3.4 million people are currently displaced due to fighting and as many as 200,000 have fled the country since January this year.

To make matters worse, the South Sudanese government angered the international community by recently announcing it would charge aid workers as much as $10,000 for visas. Aid group accuse the country of attempting to profit from the humanitarian crisis facing its people, who are suffering most from the country’s civil conflict and the famine it has caused.

Getting aid to people in South Sudan is a major concern, with the government repeatedly failing to guarantee access to the areas most in need of resources.

Nigeria’s complaint that only part of the country is suffering from food insecurity is a worrying statement. Especially when so many countries across Africa are experiencing similar malnutrition outbreaks in some regions, including major members of the East African community.

Parts of Kenya, Ethiopia and Eritrea are in severe need of assistance, with an estimated  25 million people across the continent needing humanitarian aid to avert catastrophe. A damaging combination of economic challenges, conflict and climate shock – most notably El Niño and subsequent droughts – has left countries in the region in a precarious situation.

The danger is the funds needed to avert such a large number of food shortages will never arrive as donors and aid agencies are stretched beyond their means.