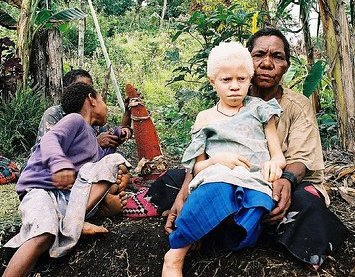 Five Tanzanian albino children, who were attacked and mutilated by thugs, are returning home after being treated in the US.

More than 76 albinos have been murdered in Tanzania since 2000 – and many more mutilated – under the superstition their limbs will bring good fortune. Five children who survived attacks were flown to the US for special treatment and now the group is returning to Tanzania.

The five children – the youngest only six years old – received prosthetic limbs and counselling in the US over the summer. Each of the victims had their arms mutilated to various extents, with one girl having her arm hacked all the way up to the armpit.

Kabula Nkarango Masanja, 17, was attacked in her home – and after her family were unable to pay off the thugs, her arm was hacked off at the armpit with three swipes. The gang told the girl’s mother they would return to get her organs, but they haven’t reappeared so far.

Ms Masanja and the other victims were flown to the US for specialist treatment to help them recover from their horrific experiences – both mentally and physically. The group were given custom-built prosthetic limbs and counselling throughout the summer – but also treated to some of the best tourist attractions in the United States.

People living with albinism in Tanzania live amongst continued persecution from witchdoctors who use their limbs, hair, teeth and genitals in rituals believed to bring wealth and good fortune.

Their body parts can be sold for thousands of dollars on the black market and albino children are common victims of attacks carried out by thugs. Fear is a part of life for people living with albinism in Tanzania and the group of children who received treatment in the US are returning to an uncertain environment.

“Albinistic girl papua new guinea” by The original uploader was Muntuwandi at English Wikipedia – Transferred from en.wikipedia to Commons.. Licensed under CC BY-SA 3.0 via Commons.