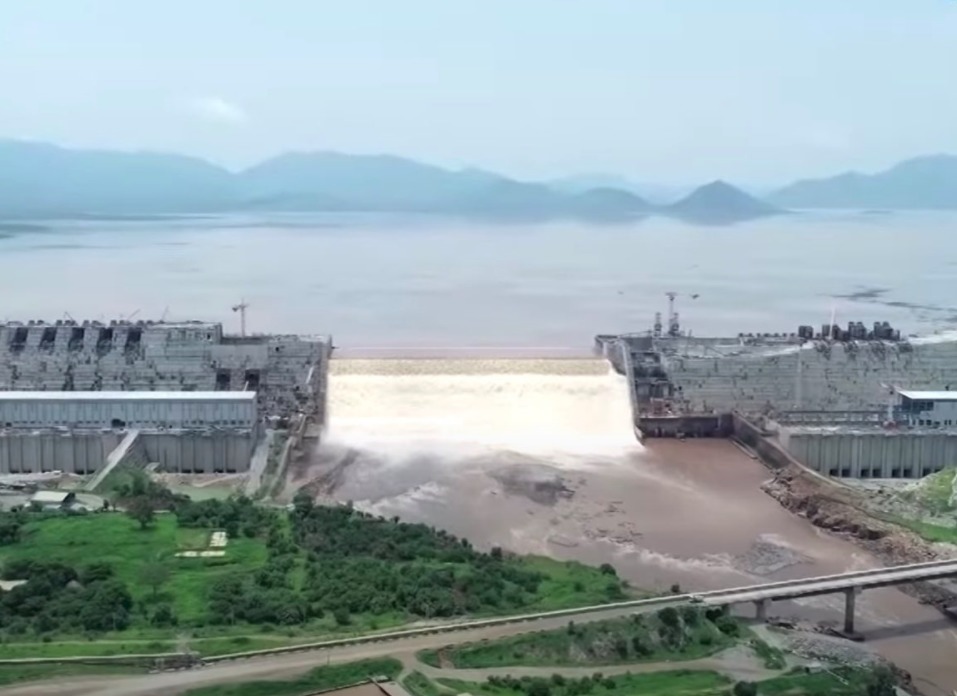 The longest river of our planet, the Nile is a result of two major tributaries, the Blue Nile and the White Nile. The White Nile originates from Lake Victoria and the Blue Nile originates from Ethiopia. The two merges together in Khartoum and flows down to Egypt and makes its final destination to the Mediterranean Sea. The Blue Nile contributes 85% of the total water flow of the mighty Nile river whereas, its brother from another mother (the White Nile) contributes the remaining 15% to bestow on the grand Nile River the might and beauty it enjoys as it makes its way down to the desert.

The Nile river basin touches a total of 11 African countries and more than 257 million people live within the basin. For millennia the two most downstream countries, Sudan and Egypt, exclusively utilized the Nile. Despite their contribution of the entire water volume, the upstream countries were kept aside and remained bystanders. They were not allowed to use the water resource that originates in their sovereign territory, not even for drinking to quench the thirst of their people. The reasons for this were two; some are hindered by financial and technological incapability while others were prohibited by agreements signed during the colonial period, where the colonizers signed on behalf of their colonies. Behind the two reasons stood a country, enforcing the colonial rule in one hand and blocking any ambition to acquire financial and technical assistance on the other hand.  It is a public secret; Egypt was behind all this.

Talking about sharing of the Nile water, Egypt likes to refer to what it calls ‘’its historic right’’ which emanates from the 1929 and 1959 agreements between Egypt and Great Britain, the latter representing its colonies in the upstream, and between Egypt and Sudan respectively. These two agreements give 82% of the entire Nile water flow to Egypt and the remaining 18% to Sudan. The two did not leave a drop of water for the upstream countries to use when they selfishly share the water that is not in their control. Ethiopia is neither a signatory of the agreements nor a colony of Great Britain. Therefore, it could not have any legal effect on Ethiopia as a nonparty state to these colonial treaties.

On March 2011 Ethiopia introduced a mega hydro-electric project on the Blue Nile river hoping to satisfy it significantly growing need for energy and feed its growing population. Ethiopia, the second-most populous country in Africa, has less than 40% of its population connected to the national power grid and a significant number of its population depends on a rain feed agriculture. If the country is to extricate its booming population out of poverty, it must utilize its only viable resource, i.e. water. The Blue Nile is the major water basin in Ethiopia where more than 22 million of its population lives. Ethiopia named its under-construction dam “the Renaissance Dam.” As the name implies, the country attaches a bigger ambition for the rebirth of the country by taking its population out of the current abject poverty.

Egypt is not happy about this project, but this time around, there is nothing it can do to stop it. Ethiopians caught not only Egypt but also the world by surprise vowing to build the $5 billion mega-dam through domestic financing. Following governments call, Ethiopians from all walks of life contributed through different schemes. Some make a direct donation, others buy bonds, students skip their lunch and contributed their budget for the construction, employees donate their monthly salary and other chip in through mobile phone crowdfunding.

After turning every stone to stop the project and yielded nothing, Egypt approached Ethiopia for talks raising its concerns over the construction of the dam. Ethiopia had every right to reject any call for discussion as Egypt consulted neither Ethiopia nor other riparian countries by the time it builds multiple megaprojects on the river. But, ‘’…in the spirit of African brotherhood, Ethiopia accepted the request and invited Sudan to join the talks’’ said a senior Ethiopian Official. The countries spent more than 7 years without reaching an understanding. Egypt’s intransigence and denial of Ethiopia’s right to use Nile water by referring to those colonial agreements are to be blamed for the failure.

By now the project is 73% completed and it is scheduled for filling as of July 2020 and the plant will start power generation by 2021. Following Ethiopia’s bold move recently Egypt started a campaign of disinforming Ethiopia’s partners to garner undeserved support in its move to stop the unstoppable.

On the disinformation campaign, Egypt is presenting itself as a victim of Ethiopia’s intransigence. Initially, it rushed the matter to the Arab League and tabled a resolution for the members to support Egypt while denying Ethiopia’s sovereign right. Sudan, which is member of the Arab League, rejected the resolution stating that it is against its national interest. Sudan further warned against internationalizing the matter. But Egypt defied the call from Ethiopia and Sudan and went on with the disinformation campaign in the Middle East, Europe, Africa and recently it has submitted a complaint to the United Nation’s Security Council, calling for the international community to pressure Ethiopia to sign an agreement cooked by Egypt and presented by the US.

Egypt is telling the world that Ethiopia is not willing to negotiate any deal. But Ethiopia has gone a long way to create trust and confidence on the project and its Higher Official are still expressing Ethiopia’s keenness for a genuine negotiation to reach an agreement on the matter. Rather it is Egypt repeatedly creating an impediment to the negotiations with its domination approach of the colonial time.

Egypt tells the world that Ethiopia is building the biggest dam in Africa. In reality, Ethiopia’s GERD is the second largest dam in Africa next to Egypt’s High Aswan Dam. The Ethiopian dam has a capacity of storing 74 BCM of water, while the Egyptian dam is storing 162 BCM of water.

Egypt, a country already exporting electricity, blames Ethiopia for aspiring to be an exporter of the same. This accusation is targeted at diminishing the importance of the dam to Ethiopia and magnifying what Nile means to Egypt. Egypt is telling the world that Ethiopia is building the dam just for national pride underscoring that for Egypt Nile is life. Of course, GERD is a symbol of national pride and self-reliance for Ethiopians, but above all, it is a matter of survival for the 110 million people. The dam means electricity, food security, environmental protection, job creation, so and so on for Ethiopia.

Egypt presents itself as the only country facing water shortage when the whole basin of the Nile is in danger. Relatively Egypt has the biggest underground water reserve in the basin. The country also has unlimited access to seawater where it can meet its needs with a cheap desalination project. Six countries in the basin including Ethiopia do not have access to seawater. This and so much more double standard and blind accusations are being traded by Egypt.

The only way out

Egypt should recognize the sovereign right of Ethiopia to equitably use the water of the Nile river as it flows in its sovereign territory. Any negotiation on the use of Nile water should be based on technical and scientific facts and politics of domination should be kept aside. The negotiations between the three countries should only focus on the filling and operation of the GERD. Issues of water distribution, as it is being pushed by Egypt, should be kept aside. Any talks of water sharing should only be at the presence of all the riparian countries, otherwise, it will be repeating the same mistakes of the 1929 and 1959 by excluding other riparian.

Egypt should refrain from any form of provocative and undiplomatic reactions and should commit itself for a genuine negotiation. When needed (as it is stated in the DoP) the parties can invite an impartial third party to help in finding a win-win solution. The international community should also impartially support the countries involved to reach an agreeable deal of common benefit. Preferably the AU or any of the AU member countries should take the lead to settle the outstanding issues in the spirit of ‘African solution to African problems.’

Egypt must know that a happier Ethiopia means a guaranteed water flow to its barren land.  Unless reforestation and environmental protections are established in Ethiopia, there is no doubt the Nile river will dry out leaving the entire people in the desert for a massive catastrophe. The better Ethiopia is satisfied with its water use, which is non-water consumptive in its nature, the more it will be motivated for environmental conservation on its highlands. Egypt should also support such conservation efforts financially. President Museveni of Uganda on an interview with an Egyptian television said: “Egypt must support the environmental conservation efforts… you can’t get the milk when you don’t care for the cow”.

The location of the dam (some 20 km from the Sudan border) by itself is an assurance for the downstream countries that Ethiopia has no intention of harming them. Because Ethiopia can’t afford to hoard the water starving its expensive turbines at the GERD. Furthermore, Egypt should encourage Ethiopia to build more dams in the upstream of GERD as more turbines in upstream means less appetite for irrigation. On the contrary, if Ethiopia is not happy about its use of Nile water, Egypt will face a grave water security problem: either the water volume will drop significantly or the quality will deteriorate. No one can guarantee if adequate water could reach the arid land or if the water quality would be bearable otherwise. You cannot expect benediction from your angry neighbour when you steal and feasting on his goat.

Currently working for an international organization, Tewodros is a masters graduate in Diplomacy and International Relations and has been following developments on the negotiations on the GERD. Tewodros' reading interest encompasses issues related to foreign policy, utilization of trans boundary water resource and multilateral diplomacy. View all posts by Tewodros G →