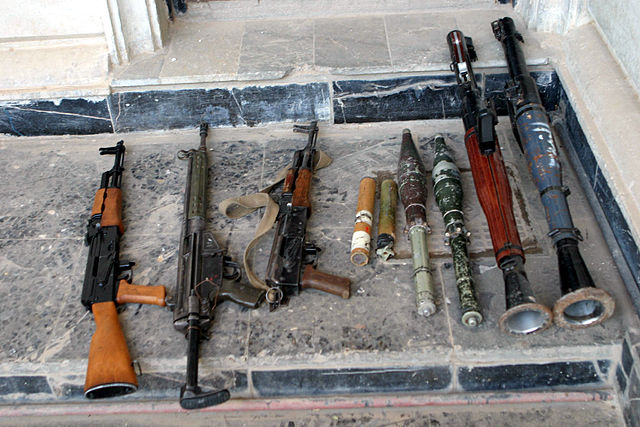 After renewed violence ni South Sudan, the UN is once again calling for an arms embargo against the country. South Sudan has rejected the proposal, saying it would expose the country to further chaos.

Uganda’s President Museveni is among the foreign powers opposing the idea. He says weakening the nation’s army at this critical stage would be a mistake. While a number of experts are sceptical the move would work.

South Sudan also rejected a UN proposal to send more peacekeeper troops into the country. Which means, a year after the peace deal was signed, UN intervention looks increasingly futile.

Would an arms embargo even work?

Suggestions that an arms embargo could hurt South Sudan’s security assumes it would work in the first place. However, existing embargoes don’t exactly paint a promising picture. An embargo in neighbouring Sudan’s Darfur region did little to stop the flow of weapons. It’s hard to see an embargo on South Sudan being any more successful.

“Even if an embargo is imposed, it doesn’t necessarily mean it’s going to be enforced,” the Small Arms Survey (SAS) said in a recent report on the Darfur embargo.

Amnesty International has labelled UN arms embargoes ineffective in the past, too.

“The United Nations Security Council arms embargoes are always flouted and circumvented and violated because the system of state regulation around the world is not strict enough,” Brian Wood, Amnesty’s head of arms control and human rights said in 2013.

Time and again foreign states decide to supply arms, regardless of any embargo that might be in place. While a complex network of traffickers makes it difficult to enforce them.

Where was Machar getting his weapons from?

One of the biggest questions hanging over the South Sudan conflict is the source of Machar’s weapons. The SPLM-IO appears to have more sophisticated weapons now than when the conflict first broke out. The question is where did they come from?

During the civil conflict many alleged that Sudan was supplying Machar’s rebels with weapons. It’s the obvious assumption, too, considering the long-running tensions between Sudan and South Sudan’s governments.

However, Machar insisted this was never the case.

“On the contrary, he is the one who buys arms and ammunition from Khartoum, and we capture them on the ground whenever we overrun their stations,” he claimed.

Machar’s claim that Sudan supplies weapons to Salva Kiir, only for him to steal them, doesn’t add up though. Conflict Armament Research found weapons used by the Sudanese government  and rebels were different. It also suggests Sudan dropped weapons in rebel areas between September and October 2014.

If Sudan did in fact supply Machar’s troops with weapons, it’s not clear how long this continued. The other scenario would be multiple nations arming Riek Machar’s rebel forces over the years.

South Sudan’s response to recent UN proposals says a lot. The rejection of an arms embargo comes as no surprise, but the government rejecting more peacekeeper troops leaves the UN somewhat powerless at this stage.

One thing South Sudan hasn’t been able to reject is the US sending in over 130 of its own troops. However, their role is to purely to protect American citizens and the embassy in Juba, President Obama insisted.

Which means the UN’peacekeepingng mission will remain unchanged and the prospect of an arms embargo forgotten – at least for now.

What could work for South Sudan?

If an arms embargo offers nothing to peace in South Sudan, then what is the answer? Uganda President Yoweri Museveni thinks uniting the country’s army is the only way to end conflict.

“What is happening in South Sudan is secretarian politics where one partisan community is fighting the other,” Museveni recently explained.

“When you impose an embargo on South Sudan you destroy the local force on which you need to build a string integrated army,” he said.

There’s logic to the argument, too. As Museveni says, South Sudan’s conflict is drawn across secretarian lines. It’s the nation’s conflicted military that fuels violence, not any kind of public revolt. Uniting the nation’s army sounds like the ideal solution and the time could be now with Machar out of the picture.