Is South Sudan standing by as its people suffer? 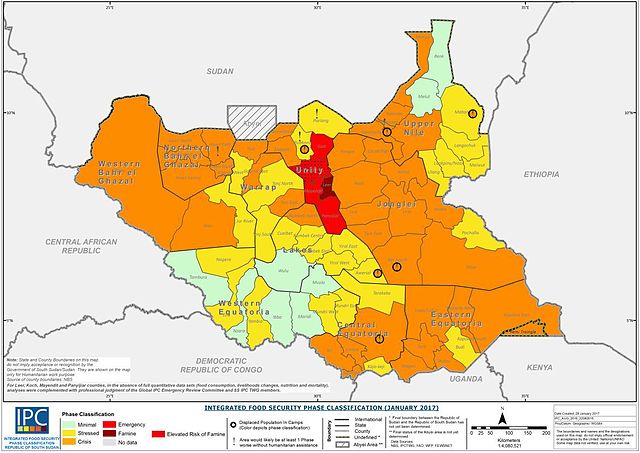 On Thursday, UN Secretary-General Antonio Guterres accused South Sudan’s government of ignoring the plight suffered by more than half the country’s population.

His comments refer to the growing threat of famine in South Sudan, which is already threatening the lives of more than 100,000. Meanwhile, 7.5 million are in need of urgent humanitarian assistance and thousands flee the country on a daily basis due to ongoing fighting between government troops and rebel forces.

Despite all this, the government shows no signs of intervening in the country’s food shortage. Equally, there’s no evidence of it lifting restrictions that stop humanitarian aid reaching its worst-affected people. Or enforcing a supposed peace deal that should have ended the country’s civil conflict, which has plagued South Sudan’s population since 2013.

As Guterres puts it, the government isn’t simply standing by as its people suffer, it’s refusing to even acknowledge their plight.

‘A refusal by the country’s leadership’

UN chief Guterres called out the South Sudanese government, citing “a refusal by the leadership to even acknowledge the crisis or to fulfil its responsibilities to end it”.

He said: “There is a strong consensus that South Sudanese leaders need to do more to demonstrate their commitment to the wellbeing of the country’s people, who are among the poorest in the world.”

Guterres insists greater pressure needs to be placed on South Sudan for the country to change its approach to dealing with food insecurity, its ongoing conflict and a spate of human rights violations – including widespread sexual violence.

“The famine is not a result of drought,” she said. “It is the result of leaders more interested in political power and personal gain than in stopping violence and allowing humanitarian access.

“The government’s continued unconscionable impediments to humanitarians seeking access to famine-stricken populations may amount to deliberate starvation tactics,” she added.

The UN says South Sudan is now the world’s fastest-growing refugee crisis with thousands fleeing to neighbouring Uganda alone every day. Uganda is now home to more than 800,000 refugees from South Sudan – more than half of whom have arrived since June last year. The Ugandan government says is refugee system is now at “breaking point”, but the influx from South Sudan continues on a daily basis.

Famine is the latest threat to life in South Sudan but it joins a long list of crises to strike the country’s most vulnerable people.

South Sudan’s civil conflict has raged since 2013, despite several peace deals being signed. Until recently, the war was mostly contained to the north of the country, but it has since spread southward, forcing yet more people to flee their homes.

“I have no hope of going back, even if the situation changes,” one refugee told Al-Jazeera. “There are only dead bodies in that country.”

It’s a conflict the international community largely blames on the country’s leadership. Both the government and rebel parties have been accused of profiteering from the war –  accumulating wealth, resources and power while the people suffer.

Organised rapes, mass killings of civilians, torture and the recruitment of child soldiers are so commonplace now that South Sudan’s suffering is at risk of being normalised. The danger is very real, too, as the country joins a growing list of African nations experiencing severe drought and famine.

If there’s a limit to the international community’s sympathy, South Sudan is among the first contenders to lose it. And it’s not because the country’s people are suffering any less than the world’s most troubled nations, but rather because its government shows no willing to accept outside help.

If the UN is right in its accusations, South Sudan’s problems are the result of its government – one that refuses to address the suffering of its people, let alone take steps to avert it.

On Friday, South Sudan’s government responded to the accusations thrown its way by the UN on Thursday.

“Instead, the government has always demonstrated willingness to facilitate their movement to areas where their operations are needed.”

Denying accusation from the international community has become something of a habit for the South Sudanese government. This month alone, the country’s regime has had to deny reports of a looming genocide in the ethnically divided nation. A week later, the government had to deny buying weapons with money that could have been used to help people facing starvation.

Meanwhile, South Sudan tops the list of the world’s most suffering nations, according to global research from Gallup. And, with an overstretched international community accusing its government of ignoring their suffering, you have to wonder who the people of South Sudan can expect to help them.