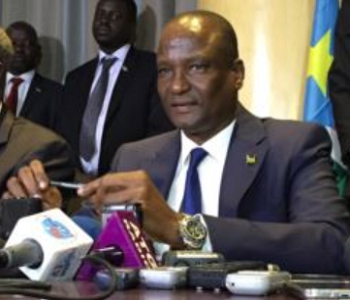 The Treasury Department in a statement on Wednesday said Gai directed the killings of opposition politician Aggrey Idri Ezibon and human rights lawyer Dong Samuel Luak. The sanctions come as the US continues to place pressure on South Sudan to form a unity government, in accordance with the country’s peace deal.

US places sanctions against vice president

South Sudan President Salva Kiir and opposition leader Riek Machar signed a peace deal in 2018, committing to the formation of a unity government that would guide the country into a new era of peace, following five years of brutal civil war. However, the South Sudanese government and main opposition group have stalled on forming the transitional government, delaying its formation on two separate occasions.

In response to the latest delay, the US recalled its ambassador from South Sudan and said it was re-evaluating its relationship with the African country’s government.

The US has been one of South Sudan’s biggest supporters throughout its campaign for independence from Sudan and its struggles as an independent state. However, continued failures to establish peace in the country have alienated South Sudan’s allies with the US itself now suggesting it’s ready to cut ties with the country unless lasting peace is established.