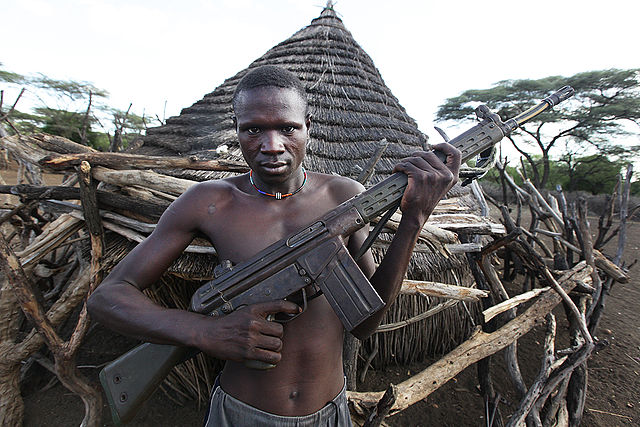 More than 500 child soldiers have been freed in South Sudan this year as pressure on the country’s government and rebel groups to end the recruitment of children increases. In April, 112 boys and 95 girls took part in a “laying down of arms ceremony” to mark the end of their service and the beginning of their lives as regular citizens again.

All of the former soldiers released last month are under the age of 18 and many considerably younger.

An estimated 19,000 child soldiers are believed to be participating in South Sudan’s civil war, which means there’s still a long way to go before the recruitment of children as soldiers in South Sudan becomes an unfortunate feature of the past.

However, the work doesn’t end with the freeing of child soldiers involved in the conflict and reintegrating these youngsters back into society presents an entirely different challenge.

Fitting back into a broken society

The issues facing former child soldiers as they attempt to reintegrate into society are numerous and complex. First of all, we’re talking about a broken society still engulfed in a civil war of political, social and ethnic divides. Conflict is everywhere, food is in short supply and public services like education and healthcare aren’t only struggling with the side effects of war; they’re deliberately targeted in attacks by government troops and rebel forces.

Anyone would struggle to reintegrate into such a society.

For child soldiers, who have experienced the brutality of war at such a young age, the required education and psychological support needed to cope with a life after conflict either in short supply or simply don’t exist in South Sudan at this time.

Living with the past

The human rights violations being carried out by soldiers in South Sudan’s conflict are widely documented. Cases of civilians being beaten, tortured, raped or killed are a constant reminder of how brutal this civil war is for the people of South Sudan and to think child soldiers aren’t involved in these atrocities is grossly naive.

George, a 17-year-old child soldier who was released in February, told UNICEF he was abducted by an armed group in 2015 and forcibly recruited as a soldier. He was forced to rape women and girls and sometimes ordered to kill people by senior soldiers.

“I did not want to do any of these things, but if I didn’t I was scared they would kill me,” he told UNICEF upon his release.

Youngsters like George will have to live the rest of their lives as a rapist and murderer. His child soldier status may absolve him legally from one as a war criminal but he’ll never escape the acts he was forced to commit during his time as a soldier.

Not all child soldiers are forcibly recruited

The harsh reality is that not every child soldier is forcibly recruited in South Sudan – many choose to fight. As Merethe Skårås writes for The Conversation: ” my research shows that though children do get forcibly recruited, many “choose” to join the armed groups.”

As Skårås highlights, many are driven by the same socio-economic problems that make South Sudan such a difficult place to live: the lack of food, housing and schooling in addition to the constant threat of violence.

For many, it’s safer to pick up a gun and join one of South Sudan’s military groups than wait for them to bust the door open and kill your family. These socio-economic problems aren’t going to disappear once a child soldier is released and expecting these youngsters to fit back into a society they chose to escape isn’t going to happen easily.

For Merethe Skårås, the only solution lies in education.

“Experience shows that to reach child soldiers with educational interventions, they must be specifically targeted. The government also needs to ensure teachers are paid and trained in psychosocial support. The education should be geared towards accommodating and supporting the childrens’ traumatic past, increasing their chances of successful reintegration.”

However, this would be asking a lot from a government that’s know to be involved in attacks on medical and education facilities, the blocking of humanitarian aid from reaching South Sudan’s most desperate people and a government that profits from dragging out this unnecessary civil conflict.