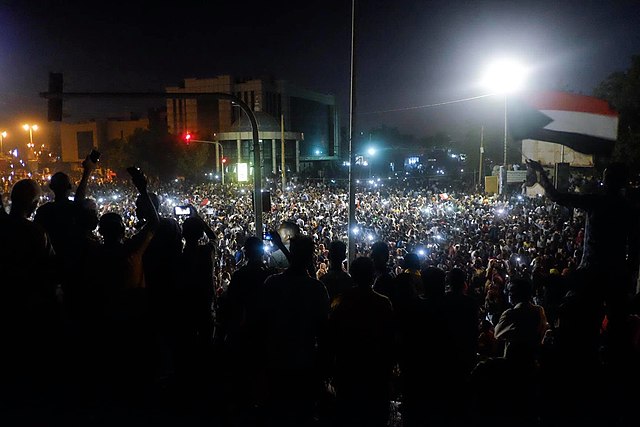 Dozens of protesters marched in the streets of Khartoum on Monday night, this time over the killing of a civilian the previous day, allegedly by paramilitaries.

The capital’s eastern district of Burri, which has been a centre for demonstrations since protests first began in December, was once again filled with revolutionary chants and Sudanese flags on Monday night – in response to the killing of a civilian in El-Souk on Sunday.

Residents gathered in El-Souk on Sunday to demand that a member of the notorious Rapid Support Forces paramilitary group leave the town, according to local sources. The paramilitaries allegedly opened fire on the demonstrators with live ammunition, killing one civilian.

The Central Committee of Sudanese Doctors (CCSD) says six civilians have been killed across Sudan over the past three days.

Monday night’s protests followed a number of previous demonstrations in the capital, demanding justice over the killing of more than 120 peaceful demonstrators during weeks of unrest in June.

At least 128 protesters are known to have been killed by armed paramilitary forces on June 3 while many more women were also raped. A key demand throughout Sudan’s opposition protests since December has been justice for the crimes committed under the rule of former president Omar al-Bashir and any political deal with the country’s ruling military council could rely on accountability for deaths of hundreds of protesters in recent weeks.