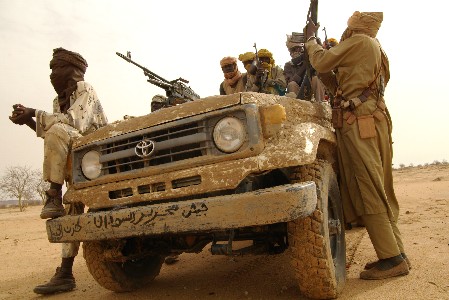 A Sudanese militia group says the European Union should pay it compensation for preventing African migrants from reaching the Mediterranean.

The militia group, which is accused of war crimes and human rights abuses in the Darfur region, says thousands of its fighters are guarding the border with Lybia, blocking migrants who are attempting to reach Europe.

The commander of the Rapid Support Forces, Mohamed Hamdan, told RSF fighters at a graduation ceremony that they’re fulfilling a role on behalf of the European Union and threatened to stop doing so unless it receives support from the EU.

“We do the job instead of the EU,” Mohamed Hamdan told his fighters at the ceremony. “That’s why they should recognize our efforts and support us as we lost a lot of men, efforts and money – otherwise we will change our minds from carrying out this duty.”

Sudan is a transit point for African migrants from various sub-Saharan countries including Eritrea, Ethiopia and Somalia as they attempt to reach Europe across the Mediterranean Sea from Libya.

The EU has pledged more than $123 million since 2016 to projects in Sudan designed to address the issues driving people to leave the country fro Europe.