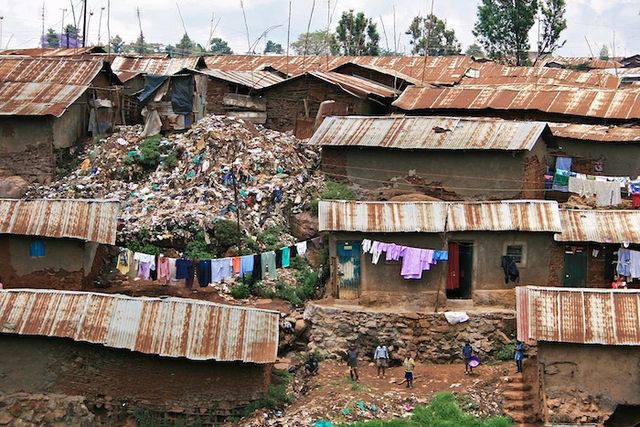 Hundreds of motorcycle taxi drivers gathered in the Kenyan capital, Nairobi, on Wednesday in honour of one of their colleagues and to protest his death. Fellow taxi rider Daniel Mburu was shot dead on Tuesday at the age of 24 and it’s already clear that we’re talking about a tragic incident.

However, the details of his death only become more harrowing as you learn more about it.

Daniel Mburu was shot dead at a hospital of all places, allegedly by a police officer of all people. His supposed crime was riding his motorcycle to the doors of the emergency sector where he was accosted by guards. Police were called after a scuffle broke out.

At this point, the obvious question might be why did Daniel Mburu choose to ride his motorcycle to the doors of the emergency unit at a hospital? Strange behaviour, perhaps, in any rational situation. Daniel Mburu rode his motorcycle to the doors of an emergency unit carrying a critically ill toddler who had been saved from drowning and rushed to the hospital by none other than Daniel Mburu himself, in a bid to save the young person’s life.

The toddler is said to be “responding well” to treatment in the same hospital he was rushed to, right up to the door of the emergency unit. While the child’s life was being saved, Daniel Mburu was assaulted and taken to the hospital’s security office where he was shot dead by a police officer.

Another tragedy in an ongoing spate of killings

The story of Daniel Mburu is painfully tragic and the young man’s hero status prior to being shot dead has captured a great deal of media attention. The interest and demands for justice over his killing are fully warranted but Mburu’s case isn’t an isolated tragedy. Rights groups have consistently found cases of police in Kenya killing people without any regard for the law or rules of force.

According to Human Rights Watch (HRW), police in the country have shot dead at least eight people in Nairobi’s Mathare, Kasarani, and Majengo settlements since December 25, 2019. The rights group states that “The police continue to kill crime suspects and protesters in cold blood despite persistent calls to end the killings and the use of excessive force.”

Multiple reports of this nature have been published in recent years.

“The killings are the latest in a longstanding pattern of excessive force and unlawful killings in Nairobi’s low-income neighbourhoods. Kenyan authorities should urgently investigate all alleged killings, many of which have been documented by Kenyan and international organizations, and ensure that all those responsible are held to account,” HRW says in its latest report.

According to a coalition of rights groups in Kenya, police in the country killed 107 people in 2019 – most of whom were young men from slum areas in the capital. Amnesty International said that 20 percent of those killed last year were under the age of 18 and a further 69 percent were aged between 18 and 35. In other words, almost 80 percent of those killed by police were under the age of 35, which Amnesty described as a campaign of criminalising poor youth in Kenya.

Demands for an investigation

Demands from rights groups for investigations into police killings in Kenya have prompted little response from authorities in the country. However, the killing of Daniel Mburu has sparked collective calls in Kenya for action to be taken. The police are yet to comment on the incident but the motorcycle taxi community, which is a crucial part of Kenya’s transport system, is spearheading calls for investigations.

Motorcycle taxis are known as boda bodas in Kenya and BodaBoda Safety Association of Kenya, Kevin Mubadi, released a statement following the death of Mburu.

“The young man was just saving another young soul as a good Samaritan, putting in mind that any emergency medical case is always given first priority no matter the situation.”

He called upon members to remain calm in their efforts to seek justice and called upon the Independent Policing Oversight Authority (IPOA) to open an investigation in the circumstances of Mburu’s death on Tuesday.

International rights groups including Human Right Watch and Amnesty International are joining calls for an independent investigation with Amnesty claiming to have secured reports indicating that Mburu was assaulted and then taken to a security office at the hospital where he was shot by a police officer.

The social media campaign calling for justice is gathering pace, too, with many online commenters saying Mburu’s death is yet another case of extrajudicial killing by police officers in Kenya.