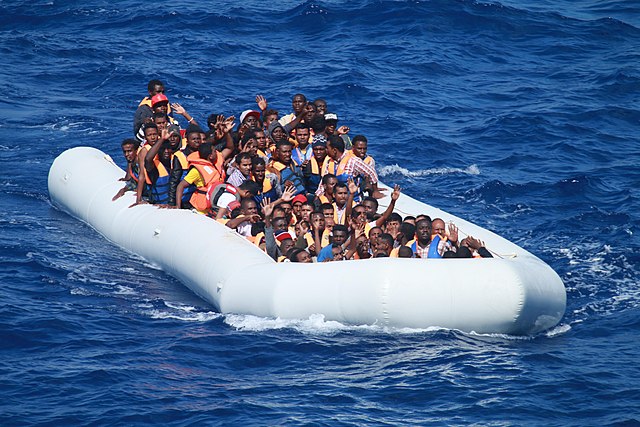 In June, two human rights lawyers filed a complaint at the International Criminal Court (ICC) against the European Union, accusing the regional bloc of crimes against humanity over the migration policy of member states.

Juan Branco and Omer Shatz submitted a 245-page document to the ICC, suggesting the EU’s Mediterranean migrant policy violates international law and directly contributes to the deaths of migrants attempting to flee violence in Africa.

The document claims to provide ICC Prosecutor, Fatou Bensouda, with “evidence implicating European Union and Member States’ officials and agents in Crimes Against Humanity, committed as part of a premeditated policy to stem migration flows from Africa via the Central Mediterranean route, from 2014 to date.”

Branco and Shatz say EU policy is “causing the death of thousands of human beings per year.”

Prosecutor Bensouda must now decide whether to open a preliminary investigation into the alleged crimes.

This is the key question Prosecutor Bensouda and any potential ICC investigation will have to answer. The complaint submitted to the Hague-based court by Juan Branco and Omer Shatz suggests the two lawyers are confident that the EU’s migrant policy does constitute crimes against humanity.

The pair have assessed European migration policies in the Mediterranean in recent years with a particular emphasis on measures taken to discourage migrants from making the journey to Europe.

Migrant-saving projects, such as the Italian Mare Nostrum programme that rescued 150,000 migrants in 2013-2014 were replaced by border guarding initiatives and collaboration with the Libyan coast guard, which has been repeatedly accused of committing atrocities against migrants.

The complaint argues that the EU’s shift towards deterrent has resulted in:

(i) the deaths by drowning of thousands of migrants, ii) the refoulement of tens of thousands of migrants attempting to flee Libya, and iii) complicity in the subsequent crimes of deportation, murder, imprisonment, enslavement, torture, rape, persecution and other inhuman acts, taking place in Libyan detention camps and torture houses.

The document amounts this to “crimes against humanity” and accuses the EU of deliberately sacrificing migrant lives to deter others from attempting to travel to Europe.

The EU’s ongoing collaboration with Lybian authorities has resulted in tens of thousands of migrants being sent back to their home countries or detained in Lybia. According to a report from Human Rights Watch (HRW), migrants are held in appalling conditions in Lybian detention centres where they are routinely tortured and women sexually abused.

The treatment in Libyan detention centers [sic] described in this report amounts to cruel, inhuman and degrading treatment. Libyan authorities are accountable for these abuses and the lack of accountability for perpetrators. Where the EU, Italy, and other governments have knowingly contributed significantly to the abuses of migrants in Libya, they have been complicit in those abuses.

More than 80 per cent of refugees and migrants locked up in one Libyan detention centre may have tuberculosis due to overcrowding and poor conditions, while at least 22 have died, according to an internal United Nations report looking into just one of many detention centres in the country.

“The EU and some of its member states, in particularly Italy, are providing substantial support to Libyan authorities to enable them to intercept migrants seeking to leave Libya by sea,” the rights group said in its report, entitled No Escape from Hell.

German boat captain Pia Klemp faces up to 20 years in prison and “horrendous fines” for saving more than 1,000 people from drowning as they attempted to cross the Mediterranean into Europe.

Klemp’s boat was seized in the summer of 2017 and her case has been drawn out for the world to see. The message seems pretty clear: saving the lives of migrants crossing the Mediterranean is a criminal offence under EU law and the penalty for doing so is close to a full life sentence in prison.

Six Tunisian fishermen were arrested in September 2018 after they saw a small vessel in distress and towed it to safety. The boat was carrying 14 migrants and the fishermen were promptly arrested at sea. It turns out the same fishermen have saved hundreds of lives in similar situations, refusing to simply allow people to drown in the Mediterranean’s choppy waters.

The EU has criminalised the act of saving migrants from drowning, publicly condemning rescue boats that save drowning refugees from the Mediterranean. Now, the US is following suit by criminalising the rescue of migrants and prosecuting those guilty of saving lives.

The EU’s continued cooperation with Lybian authorities, despite the widely documented human rights abuses taking place in its migrant detention centres, clearly needs to stop. Sadly, the EU either doesn’t see it’s doing anything wrong by facilitating this partnership or it simply doesn’t care.

Either way, the EU isn’t going to end this collaboration of its own accord and the IIC is one of the few institutions that can enforce change upon the bloc.

However, failing to investigate the EU’s migration policy will only tarnish the ICC’s reputation even further. The court has long been criticised for targeting African leaders while ignoring human rights violations taking place elsewhere in the world. The ICC has finally started to rebuild its reputation by addressing human rights violations in other parts of the world – albeit, in developing countries outside of Africa rather than issues in developed nations.

Turning its back on these allegations against the EU and the migrant lives they affect will tarnish what’s left of the ICC’s reputation as a global authority on human rights.