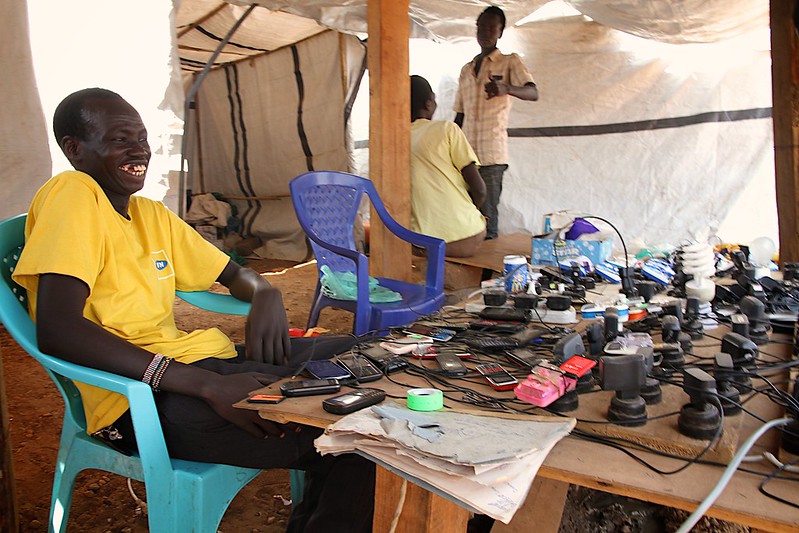 Earlier this year, the World Economic Forum announced that Africa’s digital boom is only just getting started. Investment in African startups more than doubled between 2017 and 2018, reaching a record $1.2 billion and there’s plenty of room for further growth across Africa.

There are pressing needs for technology innovation, too. For many African nations, large parts of the population are still without power, food security and other basic life essentials. The challenge of delivering these essentials without further contributing to the climate crisis means Africa can’t follow the relatively quick and easy path developed nations took of simply burning through coal.

Technology promises to help Africa increase food security, improve healthcare, ease trade difficulties, reduce election fraud and, apparently, solve every problem Africa faces – at least, if you listen to the ever-optimistic leaders of the tech industry. Technology is in a constant state of promise, always on the verge of solving that next big problem and generating huge amounts of investment along a never-ending journey of progress.

For big business, there’s plenty of reason to be so optimistic. The financial returns of a technology boom are irresistible and the startup culture makes its own promise that anyone with a good idea can make, even if the vast majority don’t and the quality of their idea often has little to do with it.

For the end user, the target audience and the digital consumer we’ve all become, the unwanted side-effects of this technology boom can leave us questioning whether it’s all really worth it.

The rate of Africa’s technology adoption is staggering but the funny thing about infrastructure is, the faster they’re built, the more vulnerable they tend to be. In the case of East Africa’s digital security infrastructure, the problems are already emerging.

East Africa has a cybercrime problem that cost Uganda 42 million shillings in 2017 and Rwanda 6 billion francs in 2018. Kenya experienced 26.6 million cyber threats in April and June alone in 2019.

Digital banking has been one of the biggest areas for technology innovation and adoption across the region. This has also brought new opportunities for criminals and the regions tech sector has failed to build a security infrastructure capable of mounting a serious defence against the growing cybersecurity risk.

The problem is so bad that financial institutions are being targeted, as well as politicians and senior government officials.

The good news is that Kenya, Rwanda and Uganda are taking steps to improve cybersecurity. However, last month’s attack against Equity Bank shows how much more needs to be done to tackle cybercrime.

The rise of hate speech and its threat to free speech

Freedom of speech is becoming a tricky topic in the age of the internet. Should Holocaust deniers be given a platform to spread their message and potentially influence the minds of others? Where do governments draw the line between terrorism and legitimate anti-government rhetoric?

These are issues the entire world is grappling with but the ramifications are particularly significant in Africa. While governments in East Africa are failing to protect people and institutions against cyber attacks, countries like Ethiopia, Tanzania and Uganda have been quick to implement cybercrime laws that criminalise anti-government messages.

In the case of Ethiopia, Prime Minister Abiy Ahmed released political prisoners detained under the country’s controversial terrorism laws that imprisoned hundreds of bloggers and journalists. Free speech has somewhat flourished under Abiy Ahmed’s government but there have been unwanted side-effects of this, too.

The country’s deeply-divided ethnic make-up has resulted in a vulgar rise in hate speech and violence between ethnic groups. The vulgarity of hate speech only intensifies on digital platforms and the escalation this results in has caused a national emergency.

Ethiopia needs to tackle hate speech but it needs to do it in a way that doesn’t compromise free speech – something that’s easier said than done. On 9 November, Ethiopia’s cabinet approved a controversial law that criminalises hate speech but fails to define what actually constitutes hate speech. This is the same problem its controversial terrorism laws employed and used to arbitrarily detain government critics – a common tactic used by African governments to detain political prisoners under vague laws.

Naturally, there’s concern over how Ethiopia’s new hate speech laws will be implemented.

Technology against the people

Ethiopia is by no means the only country facing criticism for its laws on digital technology. Nigeria is facing criticism from rights groups over its fake news bill, Tanzania has introduced licensing laws that prevent people from creating content online and Uganda has implemented a social media tax.

Increasingly, governments are using digital technology as a weapon against the people, namely political opposition members. This is a worrying trend that’s likely to get worse as Africa cosies up to China, which operates the world’s most intrusive surveillance state – a harrowing vision of the potential future we all face.

Sadly, nations with poor records on human rights only going to use technology as another means of suppression and digital tech provides a platform to govern every aspect of our lives.

The biggest problem with the technology sector is that it’s almost entirely unregulated. Tech giants like Google and Facebook are allowed to amass huge amounts of personal data and use it how they like without any significant protocol being in place.

Every selfie uploaded to Instagram is yet more data for Facebook’s facial recognition technology that can see how you and everyone else is ageing over time.

Sadly, the best people in technology don’t work for governments, they work for tech giants where huge amounts of money are to be made in an industry that essentially acts as a tax-dodging cartel. These are hardly the principles you want from institutions creating the technology that will define our future.