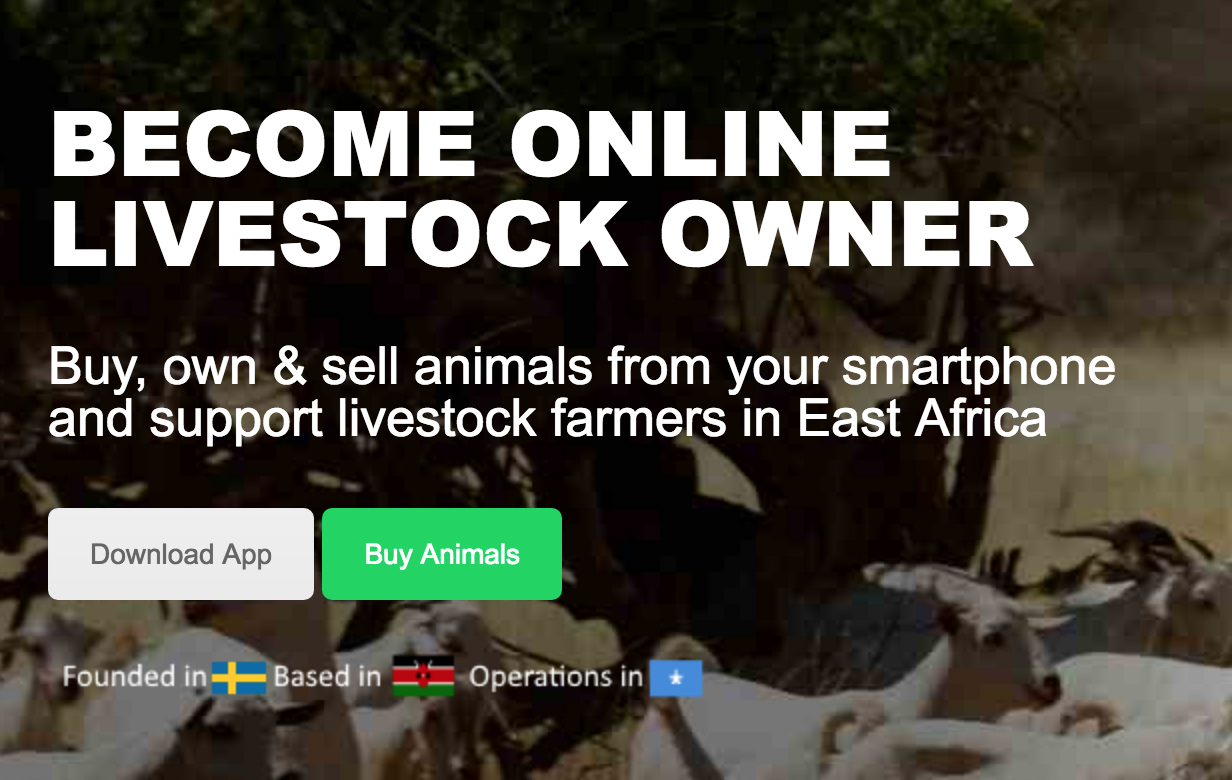 African innovation is becoming something of a buzzword on the international startup scene. The continent’s unique collection of developmental challenges and increasing entrepreneurial spirit has captured the interest of investors around the world.

It’s also produced some wonderful solutions from African innovators who are taking it upon themselves to do their part in solving the challenges faced by many countries across the continent – including Ari.farm, an app that allows people anywhere in the world to invest in Somali livestock.

Users can buy and own animals via their smartphones, which are looked after and sold by farmers in Somalia. Their investment helps livestock farmers in the country, creates jobs and helps them deal with the dry seasons that make difficult to find buyers.

Ari.farm is an African innovation designed to solve an African problem and a perfect example of the role startups can play across its countries.

Ari.farm was founded by former UN-employee and refugee, Mohamed M Jimale, who now resides in Sweden. During his time working at the UN, Jimale says he heard a lot of stories about farmers and nomads struggling in his country of birth, inspiring him to seek a sustainable solution to the increasing struggle of farmers in Somali.

His research brought him to the concept of crowd-farming, at which point he realised the potential of a livestock farmer’s most valuable assets: their animals. In theory, investors don’t particularly care what they’re investing in as long as it generates an acceptable profit and Ari.farm promises a 10-30% return on investment, depending on the kind of animal you buy.

Even at the lower end, that’s an acceptable return and the potential for significantly more makes for a tempting prospect.

Jimale quit his job at the UN and used the last of his wages to fund Ari.farm, putting all of his faith and energy into the startup. Now, the platform is starting to generate interest and gain attention from within the startup community. It also raises the question of what else in Africa can be used as a commodity to generate investment and help countries help themselves, rather than rely on the tradition of donations.

With Ari.farm, you can buy from a range of livestock animals using your mobile, including camels, goats and sheep. Goats and sheep both generate an estimated 10-30% return on investment while camels are expected to be in the region of 10% and 40%. – promising figures if they prove to be accurate.

There are no additional or ongoing fees after buying your livestock and you can sell your shares at any time of the year. After 12 months, you can choose to withdraw or reinvest in other livestock. You also get a free replacement should any of your animals die and you can follow local market prices via the mobile app.

Livestock farming contributes to roughly 40% of Somalia’s GDP but the industry faces increasing challenges brought about by environmental factors and insecurity in the country. Ari.farm investors get the opportunity to make money while also making an impact on Somalia’s farming industry and help the nation achieve its developmental targets.

Innovations like this are still a relatively new phenomenon but they’re gaining a lot of attention. While charities and non-profits are struggling to maintain a positive reputation and satisfy donors that enough of their money is going to those who really need it, startups like Ari.farm offer a new kind of alternative – on that doesn’t involve charity at all. By investing in Africa, people are making their money work for them while knowing it’s also going to make the same kind of impact as a charitable donation – most likely more.

Africa isn’t going to solve all of its problems with crowd investment startups but ventures like Ari.farm are paving the way for a new kind of investment in African countries that empowers people instead of treating them like charity cases. Crucially, they’re also proving that innovation can come from within Africa and the importance of understanding the how the continent’s developmental challenges differ from other parts of the world.