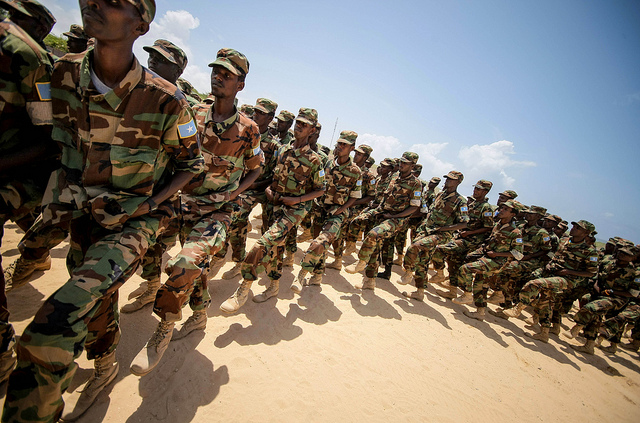 A senior Al-Shabaab commander has been captured in Somalia, according to intelligence sources on Monday.

The commander and two other senior members of the extremist group were captured by Somali and African Union troops, near the central town of Elbur, late on Sunday. The news has been confirmed by senior Somali intelligence officer, Mohamed Hasan, while Islamist group Al-Shabaab is yet to release a statement.

Among the three captured is top commander Ali Yusef – otherwise known as Ali Ganey – who is thought to be responsible for numerous attacks on civilians, plus Somali troops and AU forces in the area.

The African Union has more than 22,000 troops in Somalia alone, to help the Horn of Africa country fight against the Al-Shabaab. The group, which is believed to have ties with Al-Qaeda, has campaigned against the government, in favour of a state ruled under strict Islamic law.

Somalia, in need of support

Disgruntled soldiers have been reported to set up illegal checkpoints where they can shake down civilians for money. A military commander in southern Somalia has also raised concerns about commanding unpaid troops, for whom orders fall on “deaf ears”.

The presence of AU troops in the country has been fundamental the its progress against terrorism in recent years. The Al-Shabaab has been largely pushed back into remote parts of the country and, while it still poses a genuine threat, the capture of three senior members is another step in the right direction.

More support is on the way too, after Britain vowed to send around 300 peacekeeping troops to aid Somalia in its battle against the Al-Shabaab.