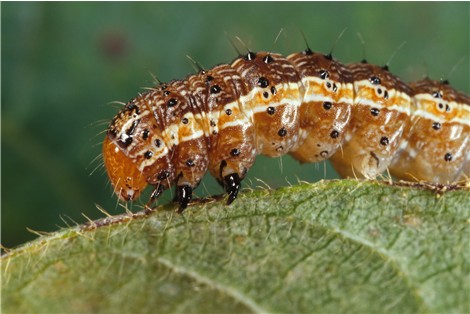 Uganda has confirmed a plague of fall armyworm caterpillars has infested 20 districts, putting a million tonnes of maize at risk if the infestation isn’t controlled urgently.

Minister of Agriculture Vincent Sempijja confirmed the news to journalists in Kampala on Friday. He warned that the country’s food production and security will be impacted, emphasising the need for a quick response to the infestation.

Fall armyworms are native to the Americas but they were spotted in Nigeria and Togo last year before they were first detected in parts of Uganda. It is still not clear how the pest made its way to Africa but the most likely answer is they were carried over through the international trade of agricultural commodities.

The caterpillars eat a wide range of crops, including maize, wheat, millet and rice – all of which are key food groups across Eastern Africa. Farmers in Uganda say maize has been the biggest loss from the infestation, which is now affecting at least 20 districts.

The adult moths move in large swarms at night, each female capable of laying up to 2,000 eggs. The caterpillars are aggressive feeders, too, potentially destroying up to a hectare of crops within 72 hours.

Uganda isn’t the first country to experience problems from the growing armyworm population. Ghana, South Africa, Zambia and Zimbabwe have already suffered damage to staple crops due to similar infestations.

The caterpillars are also known to attack cotton, potato, sugarcane, soybean and tobacco fields. Pesticides are normally effective against such infestations but fall armyworm caterpillars in the Americas have developed certain immunities and some farmers in Uganda have already complained that pesticides are not working against them.

“If nothing is done we could lose up to 15% of our maize production,” said senior agriculture minister official Okasai Opolot.