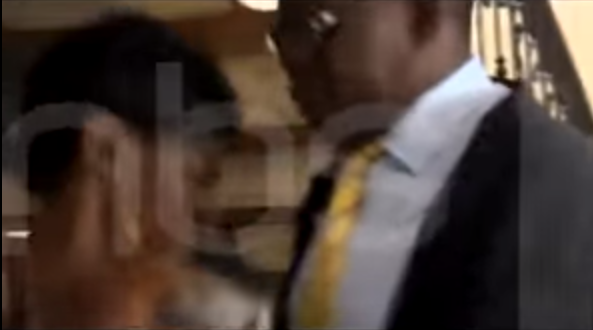 Ugandan minister without portfolio Abraham James Byandala, who is on trial for alleged corruption, appears to have punched a female journalist upon leaving court on Thursday.

A video of the incident has been shared across social media, which appears to show Byandala approaching the journalist and punching her in the stomach before casually walking off.

Byandala has since denied assaulting the journalist, claiming the video footage has been fabricated.

Journalist Judith Naluggwa has opened a case of assault at Jinja Road police Station, according to reports. She says the minister confronted her because she was filming his exit from court.

“He confronted me as he left court. He asked why I was filming him. He punched me on the stomach and scratched my left hand before he walked away. All this happened in full view of journalists and the people at the Court.” she told HRNJ Uganda.

Before the incident, Byandala is reported to have had an exchange with an NTV journalist for filming him inside the courtroom.

Assaults on journalists in Uganda have been a prevalent issue over the last decade. A Daily Monitor photographer had a gun drawn against him by Justice minister Kahinda Otafiire in 2005. Then, in 2008, three reporters were beaten up by police and had dogs set upon them while the officers watched.

The cases have been consistent ever since – most recently with WBS TV journalist Andrew Lwanga being beaten by Old Kampala Division police commander Joram Mwesigye.

“Cases of politicians targeting journalists have skyrocketed. This cannot be allowed to go on,” HRNJ-Uganda National Coordinator, Robert Ssempala, has said.

Regarding the latest incident with minister Abraham James Byandala, he says: “Eng. Byandala should resign as investigations take shape and President Yoweri Museveni should condemn the minister’s actions. The police should thoroughly investigate this matter for Byandala to face the law. All members of the media, human rights organizations and other key players demand for justice to prevail in a bid to protect journalists and freedom of the media.”