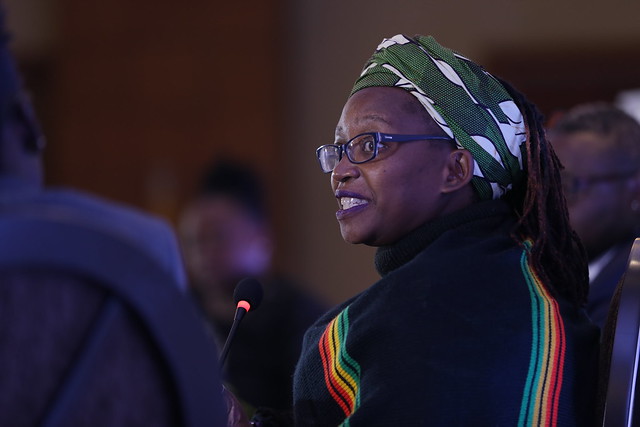 Ugandan women’s rights activist, Stella Nyanzi, has been sentenced to 18 months in prison after being found guilty of cyber harassment over comments made about President Yoweri Museveni.

Dr Nyanzi made headlines last year for calling the president “a pair of buttocks” and was arrested in November after posting a poem on Facebook suggesting it would have been better if he had died at birth. Attending Friday’s sentencing via video link, the activist exposed her breasts in protest of the verdict.

Stella Nyanzi was arrested in November last year after she posted a poem on Facebook about the president on September 16 – the day after his birthday. The poem made references to the president’s late mother, including descriptions of her genitalia, before suggesting Yoweri Museveni should have died at birth.

In the poem, Nyanzi accused the president of corroding “all morality and professionalism out of our public institutions in Uganda”.

However, it was the graphic use of language that was highlighted throughout her court case. Magistrate Gladys Kamasanyu on Thursday branded the poem “offensive and vulgar,” and said the use of language was inexcusable.

“The use of obscenity cannot be justified in any society,” Kamasanyu said. “It didn’t matter who the post was referring to.”

Activists condemned the jailing of Stella Nyanzi on the grounds of cyber harassment, saying it undermines freedom of expression. Meanwhile, Dr Nyanzi remained defiant, insisting she was proud to criticise the president.

“Send me to Luzira,” she told the court, referring to a maximum security prison for women in Kampala. “I’m proud [of what] I told a dirty, delinquent dictator,” she added.

“I want to embolden the young people,” she said. “I want them to use their voices and speak whatever words they want to speak.”