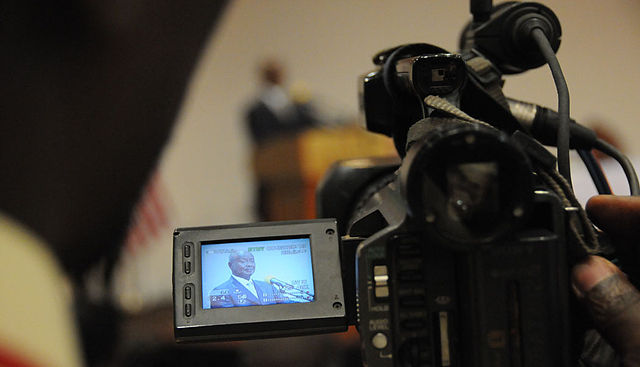 Freedom of expression is a hot topic in Uganda these days, but it’s one you’re not allowed to talk about. Criticising the government’s increasingly oppressive laws and blatant targeting of individuals who flout them can get you burned.

More specifically, this is a country where a single Facebook post, poem, song or news article can land you in prison.

Uganda’s long-serving president Yoweri Museveni remains an untouchable figure in the country and openly criticising him is a bad career move. In fact, authorities do everything they can to make it a very poor life choice, in general. All you have to do is ask the dozens of people who are detained every year for saying the wrong thing online – if you can get to speak to them at all.

The government has ramped up its efforts in recent years to regulate internet usage – particularly social media that once promised to give everyone in the country a voice. Last year, the country introduced a controversial social media tax, which has caused millions of people to quit internet services altogether.

As always, measures like these affect the poorest people most and those who have more right to complain about the condition of living under Museveni’s rule than anyone.

However, there’s a growing community of people who continue to publish critical content online, speak publicly against Museveni and fight for political change in the country.

The case of Stella Nyanzi

Stella Nyanzi has put herself in the firing line by not only speaking out against President Museveni but the nature of her language in doing so. In 2017, she called the president “a pair of buttocks” in a Facebook post and the activist later published a poem in November 2018 – the day after Museveni’s supposed birthday – wishing he had died at birth – in particularly graphic detail.

Nyanzi’s use of explicit language, genitalia and grotesque imagery only adds extra punch to the politically charged messages in her writing.

Her poem was a protest in every regard – peaceful but piercing.

Unfortunately, Nyanzi’s biggest strengths make her one of the easiest figures for Ugandan authorities to target. She was arrested on November 2, 2018, and has been incarcerated ever since at Luzira Women’s Prison.

The government said she was arrested for disrupting the peace in Uganda, the misuse of computer technology and the vulgar nature of the language used in her poem. Authorities claim Nyanzi’s depiction of the vulva contradicts African culture but this is coming from a government that has drafted laws to penalise homosexuality, on the basis of it being un-African.

Dr Nyanzi now currently has three cases pending with the Ugandan courts, each of which could result in prison sentences. And, let’s not forget she has already spent the last six months being detained without bail.

The case of Bobi Wine

Bobi Wine’s political rise has been widely documented in the Western media and, if nothing else, this has highlighted the current state of political freedoms in Uganda – or lack of them.

The MP and popular musician, whose real name is Robert Kyagulanyi, has become a symbol of hope for many young people in Uganda. He’s also lucky enough to currently be out of prison after treason charges against him were dropped earlier this year.

It would be a stretch to call him a free man, though, as he constantly finds himself being arrested and detained by police for attempting to hold music events and engage in political activities.

Ugandan authorities have banned Wine from holding concerts and they’re doing everything they can to prevent him from conducting any meaningful political activities. But they’re not only targeting the opposition figure himself. Last year, at least eight journalists were detained for reporting on Bobi Wine’s return to Uganda after he left to seek specialist medical treatment for injuries sustained while he was being held by the Ugandan army.

Journalists are being detained for simply covering the wrong topics.

Museveni is one of Africa’s most established strong me, having ruled in Uganda for almost 35 years now. His government has consistently altered the constitution to facilitate his ongoing grip on power and the president continues to win elections with resounding majorities.

Each of those election wins is contested by the opposition but the truth is Museveni remains a popular figure among large sections of the public.

This is especially true for older people in the country who remember him as a war hero whose forces overthrew former president Apollo Milton Obote and brought democracy to Uganda.

However, this “democracy” never truly materialised and Museveni now faces the prospect of dwindling support.

Uganda is the youngest population in the world with 77% of people being under 30 years of age. The legal voting age in Uganda is 18 and young people in the country only have the stories passed on from previous generations to know about the war antics of Yoweri Museveni.

Increasingly, young people in the country are turning their attention to opposition figures, such as Bobi Wine, who is emerging as a genuine presidential candidate. The latest opinion polls confirm this, too, with support for Museveni dropping to 32 per cent – war below the 50 per cent, plus one vote required to win a presidential election.

For the first time, Museveni’s government faces the prospect that someone else could win a free and fair election – something that only becomes more likely if opposition politicians and activists are given the freedom of expression required to spread their message and engage with voters.

The war on political freedoms in Uganda embodies Museveni’s fight to retain power.