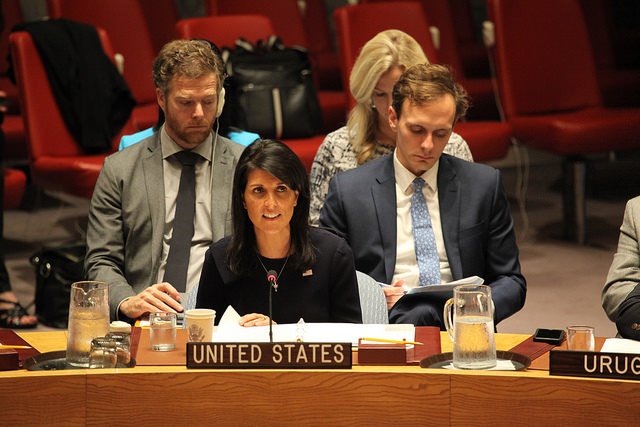 US Ambassador to the United Nations Nikki Haley called South Sudan’s government an “unfit partner” on Wednesday, amid failed efforts to implement a ceasefire.

The US envoy also criticised South Sudan President Salva Kiir as she addressed the UN, indicating that the US will no longer back the country’s leader as she called for an arms embargo on the conflict-ridden country.

“The government of South Sudan is increasingly proving itself to be an unfit partner for this council and any country seeking peace and security for the people of South Sudan,” Haley said on Wednesday. “The United States will never give up on its efforts but if there is to be true peace in South Sudan, its leaders must step up and make a true commitment to end this conflict once and for all.”

Speaking out against Salva Kiir specifically, Haley criticised the president for promoting three generals previously sanctioned by the United Nations over the killing of citizens – a move she called “a slap in the face” to the council and people of South Sudan.

She went on to say that the United States is giving up on the country’s president.

“The United States is giving up on South Sudan’s president after backing the country’s independence in 2011 and investing over $11 billion (€8 billion), in the pursuit of peace,” she said.

Haley also called for an arms embargo to be placed against South Sudan.

“Ambassador Nikki made many undue defamatory and inflammatory remarks on the situation in South Sudan including her uncalled for arms embargo. Ambassador Nikki’s remarks do not serve well the good relations which the people and the government of South Sudan always wish to exist between the two people and governments,” Wol told reporters.