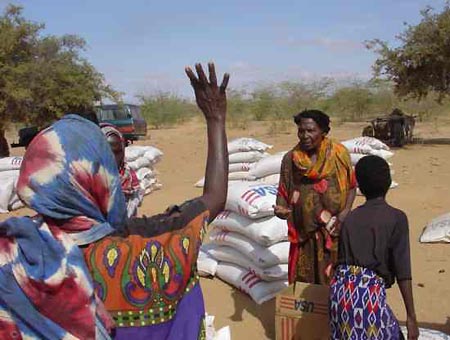 The United States announced on Saturday more than $630 million in aid for Nigeria, Somalia, South Sudan and Yemen.

The announcement came at the 2017 G20 summit in Hamburg, Germany, which has been hampered by riots between protestors and police forces. David Beasley, the new director of the UN’s World Food Program described the pledge as a “life-saving gift”.

The US is the world’s largest humanitarian donor but President Trump has proposed deep cuts to foreign aid, prompting widespread concern. The president wants to reduce the US aid bill by more than 30 percent, which comes at a time when the UN says it is facing the worst humanitarian crisis in its history.

Nigeria, Somalia, South Sudan and Yemen are four of the worst-hit countries suffering from conflict-related famine. Nigeria’s long-standing battle with militant group Boko Haram leaves millions in need of food aid while more than half of Somalia’s 12 million population is in need of assistance.

Meanwhile, South Sudan’s ongoing political crisis forced the country into famine, until the status was recently lifted by the UN. Millions are in need of aid but the country’s government is doing little to help humanitarian assistance reach those who need it most.

“We welcome President Trump’s attention to the global humanitarian crisis, but he was announcing aid that Congress approved months ago and that his administration has delayed,” Rev. David Beckmann, president of the Washington-based Christian organisation Bread for the World, said following the announcement.

The Trump administration is proposing a new aid program that consolidates emergency food aid will all other international disaster assistance. If Congress passes the new budget, it will see the US reduce the amount it dedicates to $1.5 billion, down from $2.6 billion in 2016.