Will Somalia benefit from Trump throwing his military weight around? 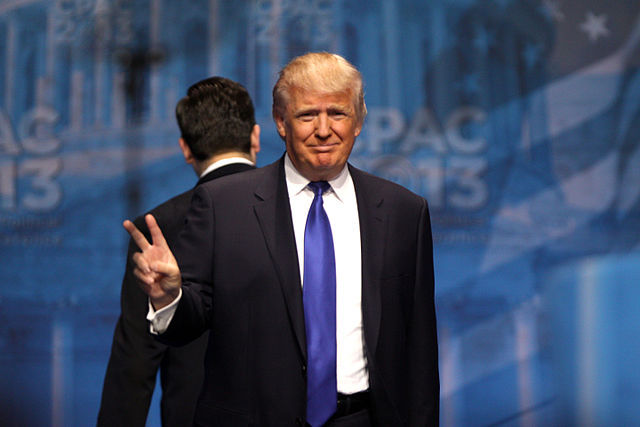 When Trump won the US presidential election late last year there was a global sense that something big – and perhaps not all that positive – had just happened. Talk of building walls, banning Muslims and rewriting international trade deals were just a few of his campaign promises that came with international consequences.

Something noticeably missing from his election campaign was talk of military intervention. Unlike Hilary Clinton, who made it pretty clear US soldiers would be taking a more active role overseas under her rule, Trump hinted at the exact opposite. Despite promising to increase military spending he denounced the country’s history of “nation building”, earning a reputation as a non-interventionist throughout his campaign.

Now, within four months of his presidency, the US has executed major airstrikes in Syria – including one that allegedly hit a mosque this week – and dropped the “mother of all bombs” on Afghanistan. Meanwhile, tension across the Korean peninsula is at an all-time high following a series warning shots fired between Trump and North Korean leader Kim Jong-un.

In the space of a few months, Trump has transformed from a “non-interventionist” into the man many fear is about to start World War III. He’s certainly throwing his military weight around and flaunting it in front of some unpredictable targets. However, if he somehow manages to avoid starting WWIII, there’s one country that could benefit from his new-found interventionism.

US troops return to Somalia

Somewhere between the headlines about provoking North Korea, mother bombs in Afghanistan and the rest of Trump’s war games, there was also the relatively modest news about the US deploying a few dozen troops in Somalia last week.

I say “relatively modest” in comparison to suggestions we could be on the brink of a thermonuclear World War III. Because there’s nothing modest about the US sending troops into Somalia for the first time since 1994, following that “Black Hawk Down” incident.

Eighteen US troops were killed in the 1993 Battle of Mogadishu, in which Somali militiamen brought down two Black Hawk helicopters. The US withdrew from its humanitarian role the following year and the United Nations, unable to protect itself alone, was forced to pull out as well.

A divided and vulnerable Somalia fell into a state of anarchy, which paved the way for Islamist group Al-Shabaab to seize control of most of the country. More than 20 years later, much of Somalia is under the control of militants, despite military intervention from African Union troops, resumed UN humanitarian aid and strategic assistance from the US.

Now the US has decided to put troops on the ground in Somalia again, lining up Somalia as one country that could benefit from Trump’s interventionism.

Will dozens of US troops be enough to help Somalia?

At this stage of Somalia’s civil conflict a few dozen US troops aren’t going to change anything overnight. In fact, you have to wonder what kind of impact they’ll be able to make aside from the symbolic gesture of US troops patrolling Mogadishu. The US says its a move that’s not so much about helping Somalia win the war against Al-Shabaab, but rather helping Somalia to help itself to win the war.

In this sense, it’s not such a radical move, given the fact AMISOM’s 22,000 strong forces are due to pull out of the country by 2020. The problem is Somalia’s existing army is incapable of keeping Al-Shabaab at bay, even with the help of AMISOM, let alone having what it takes to defeat the group by itself.

A few dozen US troops won’t be able to do that either but Somalia needs all the help it can get with building a military capable of defending its country. Critics will, of course, say it’s too little too late for the US to deploy troops in Somalia, regardless of the numbers.

In fact, the only man to survive “Black Hawk Down” says the US shouldn’t have withdrawn from Somalia in the first place.

“Without exception, those of us who were on the ground, who fought in that battle, strongly oppose that change in policy [to be active in Somalia],” Chief Warrant Officer Michael Durant said in 2011. “We had an opportunity to implement some change back in 1993 and we allowed that window of opportunity to close.”

However, the former pilot also said he thought it would be a mistake for the US to return to Somalia at this stage. Now, he admitted, there would be “limits to what we could do.”

As Mr Durant puts it, the US had its chance to prevent Al-Shabaab from ever taking hold of Somalia and it chose to leave. Now, the US could dedicate as much military force as it wants and it would bring no guarantee of defeating Al-Shabaab.

As Al-Shabaab expert and research fellow at the National Center for Scientific Research in Paris, Roland Marchal, says: “What is the aim of the war? Is it just to kill Al-Shabab fighters? If you kill 100, 200 Al-Shabab fighters, it needs only three or four months to get this number of fighters back.”

He says only a political solution will bring an end to this conflict – an opinion rarely welcomed in Western media or political circles. Somalia President Mohamed Abdullahi Mohamed attempted this much by asking Al-Shabaab fighters to surrender in exchange for education and jobs.

Of course, negotiating with terrorists isn’t in the United States’ war on terror handbook so this probably won’t be included in any training Somalia receives. The US tends to prefer airstrikes and mother bombs that kill enemies and civilians alike – a strategy that hasn’t done much to stop the spread of global extremism. Quite the opposite, in fact. You could argue the US had a hand in creating ISIS, Al-Qaeda and Al-Shabaab alike with its America-bombs-first approach and left a pretty big mess in every place it “liberates”.

Perhaps Somalia will be better off if Trump leaves it at a few dozen troops and nothing more.